From London to Marange with love 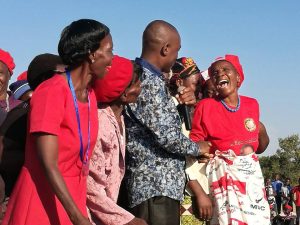 Introduction
It was a tumultuous week in week in which I interacted with Zimbabweans in the United Kingdom and came back home to Zimbabwe where I spoke to the young and the old in rural Buhera, Makoni and Marange all in Manicaland province.

From London to Zimbabwe, I interacted with fellow Zimbabweans all brimming with hope and optimism for the country they so much love. For those talented and professional Zimbabweans in the United Kingdom, it was sad that they were slugging it out in foreign lands because of lack of opportunities back home.

We pledge to correct that situation when we form the next government in the next few months.

For those in Zimbabwe, they are holding out their hope that their vote for the MDC-T Alliance in the next few months will positively change their fortune.
Zimbabweans have waited too long for positive change and they rightly believe this is their year.

We will not fail them.

A heartening spirit in London
I was in London for the better part of last week where I addressed think-tanks, met with ordinary Zimbabweans and interacted with the government and the Parliament of the United Kingdom.

I also had the opportunity with investors and business people.

I was heartened by the spirit of Zimbabweans who, though away from home, retain a positive spirit about better prospects for the country. I addressed a mammoth crowd in Bedford and assured Zimbabweans that we are determined to correct things in the next few months so that they can be able to come back home.

We told the proper script to the UK government about where we are as a country and that they should join the rest of the international country in calling for a free, fair and credible election so that a legitimate government can begin to transact the affairs of the country.

We had occasion to discuss a host of issues with the UK government. In particular, we took the opportunity to thank both the government and the people for their role s an inexhaustible fountain of charity and solidarity with the people of Zimbabwe in their struggle for democracy, the colonial period notwithstanding.

We also took the opportunity to commit ourselves to re-engagement on an equal platform and to the readmission of Zimbabwe into the family of nations.

We underscored the need for Zimbabwe to return to legitimacy through free and fair elections. We further requested the UK government to have a clear definition of what constitutes a free and fair election, complete with clear benchmarks and standards against which an assessment of the credibility of the election can be measured.

We also underscored the importance of the scaffolding and stewardship of the transition in Zimbabwe to ensure that the process is guaranteed by credible bodies for the subsistence and sustenance of peace before, during and after the elections.

We also emphasized that the UK government and others in the international community must guard against being hoodwinked into believing in the empty rhetoric of free and fair elections without the attendant tangibles to validate those claims on the ground.

From Buhera to Marange
On Saturday, I addressed a rally at Murambinda growth point in Buhera West. Just like elsewhere in the country, the land of Buhera is still shaken following the loss of a national icon and a gallant fighter for democracy, our late leader Dr. Morgan Richard Tsvangirai, who was born in the area.

Zimbabwe is a country of heroes and heroines; a cradle of fighters prepared to pay the ultimate price for their liberty and freedoms. I told the people of Buhera about the thousands who lost their lives during the liberation struggle. I reminded them of other heroes in the struggle for democracy who came from the area such as the late president Tsvangirai as well as talent Mabika and Tichaona Chiminya who were brutally murdered in post-independent Zimbabwe.

The weather-beaten people of Buhera for better prospects in the country, Justas the people at Rukweza business centre in Makoni South, where I addressed another huge crowd on Saturday afternoon.

On Sunday, I had the occasion to address the despondent people of Marange; this rich land of alluvial diamonds that was ravaged by a corrupt and avaricious government that spirited away billions of dollars leaving a hopeless and forlorn people with nothing to show for the wealth that god gave them.

Manicaland depicts a sad national story. This is the site of the once-famous Kondozi, the land known for its rich Tanganda fields and the rich diamond pickings that are all a heart-rending story of the past.

We need to bring back the glory days of Manicaland; days where the entirety of Zimbabwe was a land of grandeur and splendor.

In this rich land where diamonds were spirited away is a derelict infirmary called St Andrews hospital. Given this richness of the land, one would have expected to see a well-equipped modern hospital but alas; all we saw was a struggling health institution with no staff and no drugs in this supposedly rich land of plenty.

I had the opportunity to hold prayers with some of the infirmary’s patients and staff after hearing horrendous stories about the challenges that the hospital faces. The challenges include accommodation challenges, poor remuneration of staff, lack of drugs and other ancillaries as well as dilapidated infrastructure.

I also took the opportunity of my presence in the area to interact with community leaders in the area.

I had inspiring moments with him and other community leaders in the area.

Later, I heard a very sad story about the collapsed infrastructure in the area and how minister Chris Mushowe, who comes from the area, ensured that there was a tarred road only up to his homestead.

The people there said the “honourable” Minister at one time removed a transformer from the area after he was defeated by the MDC-T’s Shua Mudiwa in 2008.

This is the calibre of leaders that continue to drop off the decrepit Zanu PF conveyer belt of “national” leaders!

Come the next election, we pledge to end this wanton tale of selfishness; this distressing yarn of inept leadership that continues to curse our land.

Our incoming government will infuse new hope and optimism in the lives of the long-suffering people of Zimbabwe.

Our track record speaks for itself.