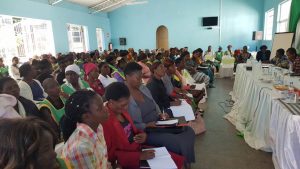 This was agreed during a National Women’s Summit on elections conducted by Heal Zimbabwe on 27 April 2018 in Harare. The meeting brought together 250 rural women leaders from the 210 constituencies. The summit was held in pursuit of United Nations Security Council Resolution 1325 (SCR1325), that recognizes the under-valued and under-utilized contributions women make to conflict prevention, peacekeeping, conflict resolution, and peace-building. The resolution also   stresses the importance of women’s equal and full participation as active agents in peace and security. Some of the key provisions of this resolution include the need for increased participation and representation of women at all levels of decision-making and the need for attention to specific protection needs of women and girls in conflict.

The women’s summit brought together various stakeholders who include Commissioners from Independent Commissions that support Democracy which are the National Peace and Reconciliation Commission (NPRC) Zimbabwe Human Rights Commission (ZHRC), legislators and Civil Society Organizations (CSOS). The main objective of the indaba was to afford rural women who are part of Heal Zimbabwe community peace structures an opportunity to meaningfully input in electoral processes in Zimbabwe and come up with minimum standards for the holding of free, fair and peaceful elections.

In his opening remarks, Heal Zimbabwe Executive Director, Rashid Mahiya underscored the need for women to take up leadership roles and actively participate in electoral processes by not only voting but also running for political office. “Heal Zimbabwe will continue to work with women since they are key stakeholders in the attainment of peace and social cohesion. Added to this, women are capable leaders who can champion unity and peace in local communities..” he said.

NPRC Commissioner, Netty Musanhu in her address highlighted that the NPRC has a Victims and Gender Committee responsible for investigating violations related to gender and further revealed that since women suffered the brunt of political violence, the NPRC was open to receive complaints through its complaints handling mechanism. “..There is need for women from across the political divide to unite and repel the forces of violence. Women are the worst affected by political violence, hence the need by the NPRC to work closely with women…” she said. Commissioner Musanhu also highlighted that the NPRC has taken note of the various reconciliation issues across the provinces during its stakeholder consultative meetings. She also acknowledged the immense role being played by rural women leaders to build peace and social cohesion in local communities.

Other presenters such as Legislator Priscilla Misihairambwi and Concillia Chinanzvavana encouraged women to actively participate in electoral processes and also promised to continue to advocate for women’s rights in Parliament. Some of the issues that came out during the summit include the fact that most rural women are not aware of their human rights, there was increase in the demand of serial numbers by Traditional leaders and ZANU PF structures. Stakeholders noted that this form of intimidation discourages women from running for political office.

The following are some of the minimum demands for free, fair, credible and peaceful elections agreed at the Women’s Summit on peace:

Ø  Independent commissions such as ZEC, ZHRC and NPRC must carry out robust awareness campaigns on the need for peace in rural communities ahead of the 2018 elections.

Ø  Political parties must make public pledges to uphold peace and report supporters who perpetrate violence to the police.

Ø  Traditional leaders must allow citizens and CSOs to campaign for peace in rural communities.

Ø  Traditional leaders must be apolitical and allow people to vote freely without being intimidated.

Ø  International observers must be deployed before elections so that they can also witness the rampant intimidation around the BVR process.

Ø  Soldiers and the police must not intimidate citizens but be there to serve and protect the rights of citizens.

Ø  All political parties must be afforded an opportunity to campaign freely and must have access to media.

Ø  The police must arrest all perpetrators of violence without fear or favor.

Heal Zimbabwe through its National Peace campaign will continue to campaign aggressively on the need for citizens to uphold peace before, during and after the 2018 elections.