The hypocrisy at the heart of the Zanu PF regime was exposed by President Mnangagwa’s son Emmerson Jr in a graphic interview he gave in Harare to the London Sunday Times veteran foreign correspondent Christina Lamb about his father’s escape from attempts by the Mugabes to kill him. 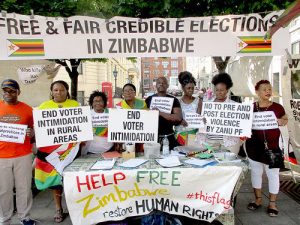 Emmerson Jr said his father refused to believe that the Mugabes were out to get him until he was given a vanilla ice-cream cone at a Zanu PF rally last August and was violently ill. He was airlifted to South Africa where doctors identified arsenic. The ice-cream allegedly came from Grace’s dairy.

When Mugabe sacked Mnangagwa on 6th November, Emmerson Jr and two of his brothers drove to their father’s house. He said all security had been removed. ‘People were phoning to say, they’re coming to arrest you and will put you in a police station and poison you or hang you and make it look like you committed suicide,’ Emmerson Jr said.

He said he and his father took to the mountains to cross the border into Mozambique, passing through a landmine area, after being stopped at gunpoint at a border checkpoint. From their hiding place in Beira, they were rescued by a friend in South Africa who sent a plane to pick them up and take them to Pretoria where they hid in a small flat ‘living off takeaways from Nandos’.

The article continues: ‘Their guards told them a bounty of $10m (£7.4m) had been put on their heads and that 50 Zimbabwean intelligence agents had been sent to South Africa to search for them.’ (See: http://www.zimvigil.co.uk/vigil-news/campaign-news/940-grace-mugabes-vendetta-against-her-snake-emmerson-mnangagwa).

Emmerson Jr’s account portrays his father in an heroic light and mainly blames Grace for his troubles. But the Vigil is puzzled why Mnangagwa still pays lip service to the myth of Mugabe as the Great Leader, declaring a national holiday in his honour. At the same time, the new Mnangagwa regime claims it has abandoned all Mugabe’s ideological baggage and seeks to cozy up to the formerly-despised ‘Western imperialist racist neo-liberal rapacious capitalists’.

The Vigil is not surprised that Mnangagwa is finding it hard to sack Deputy Finance Minister Terence Mukupe who warned the opposition that the army would never allow anyone but Zanu PF to rule – this from a man accused of fuel smuggling and assaulting a top official in his office and is currently being sued by a Chinese business for an unpaid bill. But how can Mnangagwa sack him when he himself proclaims that Zanu PF will rule forever?

With Mugabe ignoring the will of Parliament to account for his actions and apparently plotting against Mnangagwa, isn’t it time to drop the pretence and finally disown the poisonous Mugabe heritage which has reduced Zimbabwe to penury and destroyed so many lives?