Harare - To ensure free and fair elections, Zimbabwe must reform its public media and provide coverage of the news according to the Constitution, media and election analysts say. 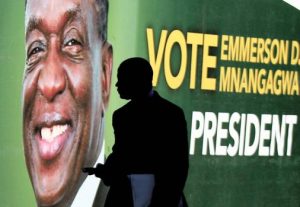 A delegate arrives for a meeting between Zimbabwean president Emmerson Mnangagwa and liberation war veterans in Harare, Zimbabwe, on Friday.

Zimbabwe must hold elections before August 21.

The most serious obstacle to President Emmerson Mnangagwa achieving international approval for his elections is the public media, warn civil rights groups and media analysts.

He has repeatedly said in briefings with foreign diplomats that he guaranteed Zimbabwe would have free and fair elections.

Zimbabwe’s publicly owned media from its single, amateur television channel as well as at least nine radio stations, are all either owned by the state or controlled by ruling Zanu-PF loyalists.

Even the group, Zimbabwe Newspapers, the country’s largest print media company, is largely owned by the state.

Most journalists who tried to buck the state-controlled media in the past 50 years were axed, fled or quit. And some were arrested, charged, harassed and refused media accreditation and were forced to work illegally.

The worst post-independence period for media was from 2001 when then-information minister Jonathan Moyo floated new legislation, the Access to Information and Protection of Privacy Act, which saw widespread repression of media and journalists were supposed to be controlled by the primitive Media Commission.

According to the constitution which was adopted by referendum in 2013, public media has to be free of political interference or control.

There are several smaller privately owned newspapers which have regularly and bravely challenged Zanu-PF, and they seem to operate more freely in recent years.

But they are not owned by the public.

Opposition Movement for Democratic Change (MDC)boss Nelson Chamisa, 40, who has so far not experienced media freedom in Zimbabwe, said last week: “It is sad that despite the novel provisions in the constitution demanding media diversity, Zimbabwe still has one national broadcaster 38 years after independence.”

The MDC leader said licences for the few community radio stations and newspapers were issued to those linked to the ruling party.

Patience Zirima, director of Media Monitors in Harare, said the state owned media fell short of standards “laid out in the constitution”.

“Research we conducted in February indicates that ZBC and the Zimpapers group have not provided fair opportunity for the representation of all views especially political voices and neither have they been impartial.

“There is an overwhelming dominance of Zanu-PF in stories in the state-owned media and people from the party are given more time to speak or comment on issues.”