Tourists are once again flocking to Zimbabwe, with the country’s top resort town of Victoria Falls enjoying record numbers, and healthy forward bookings indicating the boom is set to continue, a leading tourism industry figure says. 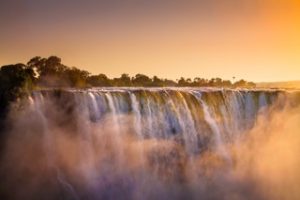 Victoria Falls, one of the Seven Natural Wonders of the World.

“Talking to colleagues in the town it is clear that forward bookings are much stronger than
usual for the rest of 2018 and all indicators for 2019 reflect continued growth,” Mr Kennedy
said.

“These bookings suggest that Victoria Falls is heading towards becoming a one season
destination, so high season all year, with a few short troughs here and there,” he said.
Other indicators included a 25 percent growth in revenue across the ten hotels over the
first three months of this year, compared to the same period last year, as well as an 11 per
cent increase in RevPAR (revenue per available room), a key industry measurement.

“The number of new rooms either under construction and/or about to open adds further
evidence of the confidence that existing and new investors are showing in Victoria Falls as a
tourist destination,” he said.

Victoria Falls was not alone in drawing large numbers of tourists, with nearby Hwange
National Park enjoying a busy year last year, and, also experiencing significant growth and
new investment into new camps and lodges, he said.

“There are four or five new camps and lodges that have opened or are about to open in the
Hwange area, as well as two or three new investors into existing National Parks’
concessions,” Mr Kennedy said.

“On the back of this very clear demand for Victoria Falls and the region, airlines such as SA
Airlink are increasing capacity on the Cape Town – Victoria Falls route from July 2018.”

Reports from Matopos, Mana Pools and Kariba also suggest that arrivals and interest are
significantly up, but air access needs to be improved to these destinations, and the self-drive
market – local, regional and international – to return, he said.

“Together with this growth trend the industry looks forward to the day when our national
airline, Air Zimbabwe, is flying tourists around Zimbabwe to most of our incredible
destinations, with improved access for domestic tourists and visitors alike.”

A reliable and affordable national airline would support the Zimbabwean Minister of
Tourism and Hospitality Industry Prisca Mupfumira’s initiative for a greater domestic
tourism campaign, he added.