VICTORIA FALLS (Reuters) - Zimbabwe needs up to $11 billion to modernise its mines and boost production to maximum capacity over the next five years, the head of the country’s Chamber of Mines said on Friday. 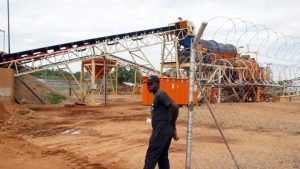 Foreign investor interest in the southern African nation is growing after the fall of longtime leader Robert Mugabe following a de facto military coup last November but projects are still constrained by lack of funding.

Batirai Manhando, Chamber of Mines president, said with the exception of platinum producers, all other mines, including those of gold, nickel, cobalt and coal were operating below their installed capacity.

Mining generates more than half of Zimbabwe’s export receipts — last year it earned $2.8 billion — but industry executives say it has the potential to earn more with increased investment.

“The local mining industry is currently operating below capacity on the back of capital shortages,” Manhando told an annual meeting of the mining chamber.

“At the beginning of the year the capital intensive industry required $7 billion for both ramp-up and sustenance capital. The figure has lately been revised upwards to $11 billion with renewed interest in our sector,” Manhando said.

Zimbabwe holds the second largest deposits of platinum and chrome after South Africa and has lately seen increased interest from lithium investors, who however say funding still remains a hurdle.

Manhando said mining companies in Zimbabwe faced problems that included high costs of electricity, labour and royalty fees when compared to other jurisdictions. There had also been little exploration in the country since 2000, he added.

Equipment at most mines was more than 50 years old, severely undermining efficiency and cost effectiveness of the sector, said Manhando.

Mines Minister Winston Chitando said the government would announce a new “mining vision” at the end of June and projected that the output of gold could rise to 85 tonnes in five years.

Output of gold, the biggest mineral by earnings, is expected to rise to 30 tonnes this year from 23 tonnes in 2017, according to Ministry of Mines data. (Reporting by MacDonald Dzirutwe Editing by Keith Weir)