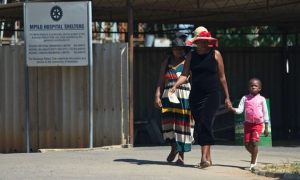 Two women and a child arrive at Mpilo central hospital in the city of Bulawayo. Three-quarters of Zimbabwean women with cervical cancer seek treatment too late. Photograph: Zinyange Auntony/AFP/Getty Images

More than 800,000 girls in Zimbabwe will be vaccinated against the human papilloma virus in a major push to stem the country’s soaring cervical cancer rates.

The HPV vaccine will be included in routine immunisations and rolled out in schools and health facilities countrywide to reach girls aged 10 to 14, the government announced this week. The campaign, a collaborative effort involving the UN children’s agency, Unicef, together with the World Health Organization and the Zimbabwean health ministry, is expected to reach 95% of the country.

Roughly 2,270 women in Zimbabwe are diagnosed with cervical cancer every year, making it the most common cancer among women. But because HPV is a sexually transmitted infection, and as such carries a high degree of social stigma, women often fail to seek medical advice until it is too late. Screening, diagnosis and treatment services are predominantly limited to larger cities.

As a result, three-quarters of women in Zimbabwe with cervical cancer seek treatment too late. The mortality rate for the cancer has been recorded at 64%.

“This is an important event for Zimbabwe for improving women’s health,” said the country’s first lady, Auxillia Mnangagwa, on announcing the rollout. “Zimbabwe is highly burdened with cervical cancer and the mortality rate of 64% has to be reversed. Today we are dealing a blow against cervical cancer.”

The vaccine will be funded by the Zimbabwean government and the Global Alliance for Vaccines and Immunisation, which has secured an affordable, sustainable supply of HPV vaccines at $4.50 a dose. The rollout makes Zimbabwe the eighth African country to introduce the HPV vaccine into its routine immunisation programme, following Botswana, Kenya, Mauritius, Rwanda, Seychelles, South Africa and Uganda.

More than 260,000 women worldwide die annually of cervical cancer, which could soon overtake childbirth as the developing world’s biggest killer of women. Low- and middle-income countries account for 85% of all deaths, and Zimbabwe is among the five nations – all of them in sub-Saharan Africa – with the highest incidence of cervical cancer.