Harare, Zimbabwe (CNN) Zimbabwe's parliament has threatened to charge the country's former president Robert Mugabe with contempt if he does not appear at a hearing probing $15 billion in lost diamond revenue. 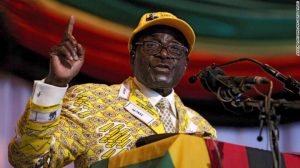 Mugabe, 94, failed to show up at a hearing Monday before the Zimbabwe’s Mines and Energy Parliament Portfolios Committee to clarify claims he made in 2016 that the country had lost $15 billion through diamond leakages.
It was the second time Mugabe did not turn up to face the lawmakers and he drew the anger of the committee officials who have ordered him to turn up on June 11 or face contempt charges and possible jail time.
“We expect him to have time to appear before parliament. We expect him to co-operate and parliament has power to summon anyone,” said committee chairman Temba Mliswa Monday told journalists in Harare.
He added: “In the letter we are writing to him, which is a final letter we are reminding him that we will be summoning him and we hope we are not getting to that stage of summoning a former president…
“Let me remind you that the former and late MP Roy Bennett was sent to prison by parliament. So let’s be mindful of the powers the parliament has,” Mliswa added.
During his 92nd birthday in 2016, Mugabe told the state broadcaster that Zimbabwe had lost $15 billion through diamond leakages, resulting in him nationalizing the industry.
Mugabe who ruled Zimbabwe for nearly 38 years was forced to leave power last November after giving in to military pressure.
Since then he has been rarely seen in public and only addressed a few journalists earlier this year when he accused his former deputy and successor President Emmerson Mnangagwa of dethroning him unconstitutionally.
Post published in: Featured