JOHANNESBURG – A play once banned by Robert Mugabe, has been performed for the first time in Zimbabwe. 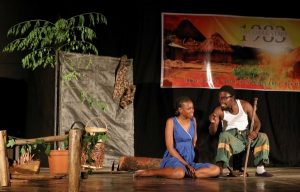 Zimbabwean actors perform on stage in a production of “1983 – The Dark Years”, a play once banned by Robert Mugabe, that relives the horrors of a government crackdown on rebels loyal to political rival Joshua Nkomo in the mid-1980s. Photo: REUTERS/Philimon Bulawayo

It deals with a series of massacres the Zimbabwe National Army carried out against Ndebele civilians in the 1980s.

About 20 0000 died in the massacres, now known as Gukurahandi.

In one scene, a mother is forced to burn her baby alive.

“In most scenes like the rape scenes and other sensitive scenes, people were actually laughing, I was not because I am more closer to the issue, I really know how it has broken people down and people need to actually forgive at least, we need for people to open up and speak out,” said Linda Mpofu, who watched the play.

“I am so emotional about this issue because we lost our loved ones during that time. I was young by then, we could not sleep at home sometimes,” said another audience member, Sipesa Moyo.