Bloemfontein - You won’t see Tendai “Beast” Mtawarira giving interviews this week, or flashing his trademark smile around the media. 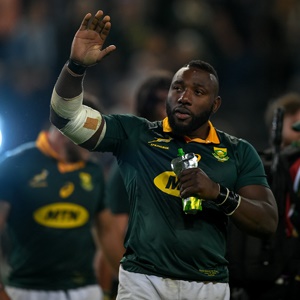 In fact, the first you’re likely to see Mtawarira is when he runs onto the field on Saturday to cap another emotional day for South African rugby and become the first black Springbok to earn 100 caps.

Silence in the media in the build-up was Mtawarira’s request, made humbly and without any form of arrogance.

But inside the team his voice will be one of the loudest as Rassie Erasmus’ Boks look to sew up the test series against England on Saturday.

The Zimbabwean-born prop has been through so much and overcome so many obstacles in his rugby career and it is hoped that Saturday will be a fitting tribute to the man whose heart is as big as his love for the Bok jersey.

Just as Siya Kolisi made history at Ellis Park, Mtawarira’s milestone will make the Bloemfontein test an emotional one, falling on one of the most important days in South African history – June 16 – and will be played in front of President Cyril Ramaphosa.

And while Mtawarira hasn’t done much talking in the public, Springbok forwards coach Matt Proudfoot says he has one of the biggest voices in the pack.

“Beast is a big voice in the pack, and that is why he is so important to us. I think if you look at the Sharks environment and what it meant for Thomas du Toit to play tighthead,” he explained.

“Front row is about combinations, when you have played with Bismarck and Jannie (du Plessis), they were a strong combination. When he comes into our environment, our tightheads are young and he adds stability to that.

Proudfoot has called on his pack to respond with a performance that honours the milestone that so few in Bok history have achieved in the past.

“It will be a fantastic achievement for a very good man. He is already the most capped front row forward. I’d love to do a stat on how many he came off the bench and how many he started. I think a high percentage of his caps are starting.

“I think it is an incredible achievement for a guy like that to have that sort of longevity in a tough position like that where there is a lot of competition. I think it will be something to savour. And I’d like to see the pack respond to that and make it a special occasion for him.

“I think that will be my focus, that we respond and really cherish that moment for him. And play accordingly, that we honour him.”

Mtawarira was almost lost to the Springboks after the passport saga in 2010, when Parliament’s Sporting Committee accused SA Rugby of illegally fielding Mtawarira as he didn’t have a South African passport.

Mtawarira missed the three tests against France as the matter got sorted out, but admitted to the Irish Times that it was a hurtful period in his career.

“I am a South African at heart. I love this country. It has become my home. It is everything to me. Wearing the green and gold of the Springboks is a huge honour for me. That jersey is part of me. The green and gold flows in my blood,” he said at the time.

“It was really hurtful. I remember being emotional in front of my wife [Kuziva], my fiancée at that time, when the Springboks squad was announced and I wasn’t in it.

“I remember getting the call from Oregan Hoskins [SARU president] to say they can’t pick me for the side as they need to sort out my citizenship.

“I had to watch France play South Africa. I couldn’t even sit down because I wanted to be there with the guys.”

Mtawarira had to also overcome a heart condition that threatened his career and was forced to withdraw from the test against Ireland in Dublin in 2012 after he experienced heart palpitations. The prop twice underwent surgery for what was described as a hereditary condition and fought on.

The glowing praises his teammates speak of him know no bounds, and his love and desire for the Springboks is underlined by the fact he has never gone overseas to pursue bigger paydays. As probably the world’s foremost loosehead over the last decade the opportunities were three, but Beast simply carried on playing at home.

Proudfoot was clear at what makes him so special – his professionalism within the side.

“He is a professional. He takes care of his body, he does his work. He works very, very hard and does extras. He is just a professional prop.

“He has a very good physique, he takes care of it and he is humble. He is preparared to learn and ride out the ups and downs of a career. He is prepared to take it on the chin when he is beaten – it is a position where one you win, one you lose.

“He is humble and understands that this is the process. That is what you want from sportsmen, to be confident in their abilities, but humble enough to know that you are going to be beaten and you need to know how to respond.”

So when Tendai Mtawarira rewrites another chapter on Saturday and carves another indelible mark in the Springbok legacy in Bloemfontein on Saturday to the loud crowd chants of “Beast” when he runs out, there will be few players worldwide that command the respect both internally in a squad and across the world as he does.

So when Mzanzi’s favourite beast asks for a little peace and quiet to prepare for his big day, he more than deserves it.