Statement on the Signing of the Peace Pledge by Political Leaders 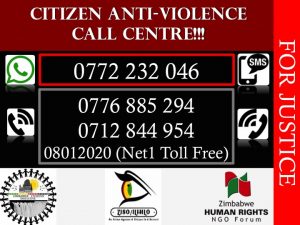 This year 2018, 26 June 2018 heralded a new era in our politics as 20 candidates participating in the 2018 Presidential election signed a Peace Pledge at a colourful event organized by the National Peace and Reconciliation Commission (NPRC). Coming on the eve of the 10 year anniversary of 27 June 2008 Presidential Election Run-Off and related bloodletting in which over 200 people were killed in a space of 30 days, this event signified a call welling from the depth of a nation that has been locked in the pangs of violence for the past century.

The Zimbabwe Human Rights NGO Forum (the Forum), confronted with the ugliness of violence in its work with victims and survivors, deeply appreciates this effort by the NPRC and national leaders who took the Pledge for Peace.

Beyond the pledge, it is always worth asking the question, how did we get here, and how do we emerge from this predicament as a nation.

Just a few days from the signing of the Peace Pledge, the nation was shell-shocked following the callous bombing incident at a ZANU PF rally in Bulawayo’s White City Stadium in a tragedy, which has since claimed the lives of two people.

On 10 June 2018, the Zimbabwe Human Rights NGO Forum (the Forum) verified and reported that a two-year-old child, Professor Lumbe had been killed in suspected politically related hostilities dating back to 2014.  The 2017 State of Human Rights Report published by the Forum earlier this year reported that four people were killed in Marange by suspected security guards linked to a mining company.  The same report documents that over 50 000 school children have been subjected to various violations. These incidences of violence in this election season tell us that peace must be an urgent item on our agenda. In a democracy, elections are supposed to symbolise the empowering nature of participation in governance.  And yet in our country, elections are a declaration of war against the people.

As political leaders took the Peace Pledge, political activists continued with violence in communities. Human rights groups have documented many cases of traditional leaders arrogantly violating the tenets of our constitution by declaring political allegiance to political parties and threatening villagers with violence. Hate speech continues to dominate our airwaves and political leaders continue the hypocrisy of preaching peace during the day while practising violence at the night.

This state of affairs is saddening, to say the least, and challenges our sincerity as a nation to have a lasting peace and prosperous environment.

As the nation marks the peace commitment by political leaders, the Forum calls for all sectors of Zimbabwe to walk this talk of peace. The violence and intimidation being witnessed in communities must stop and the police must act against perpetrators.  Traditional leaders who openly defy the law must be held accountable. Leaders who resort to hate speech must be held accountable. Not only must we speak against violence,  we must act against violence.

The Forum, seeking an end to violence is mobilizing the citizens of Zimbabwe to make a stand against violence through the Anti-Violence Citizen Call Centre. We believe when citizens stand up against violence, a bold statement can be made. A significant number of perpetrators have already been brought before justice and many more are on the way.  We urge our national leaders to join this movement or posterity will judge them harshly.  Zimbabwe cannot continue to sustain the legacy of violence by doing nothing.  For the Forum, our members and partners, the greatest Peace Pledge is to stand up against violence and to do so now!!!

“I PLEDGE FOR PEACE! I ACT AGAINST VIOLENCE!!!”