The people's President Advocate Nelson Chamisa and the party leadership today hosted a workshop for the 2018 aspiring parliamentary candidates where he called for unity and togetherness, stressing that the forthcoming election had nothing to do with their individual interests but with the interests of the people of Zimbabwe. 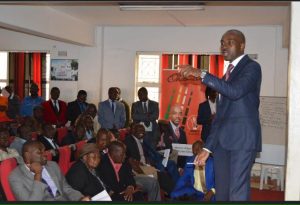 He called for those that could not make it in the primaries to be magnanimous and work together with the winning candidates in mobilizing support in the coming election, saying “there is no winner or loser in this process as we should all work for the greater good of the party and the country.”

President Chamisa stressed that the candidate selection process went on well albeit some challenges.

Addressing the workshop, which lasted for over seven hours, the MDC Alliance Presidential candidate said the party managed to cater for people living with disabilities in its candidate selection process, saying the internal electoral process was inclusive.

He said the party will not tolerate any corruption in those that would be assuming leadership, saying those found wanting had no place in the New Zimbabwe as the new administration will adopt a zero tolerance to corruption.

The people’s president took time to walk the candidates through the five pillars of the party’s SMART policy programme which will be pursued by the New Government.

He stressed out details of the party’s policy programme in addressing the governance culture, the economy, social services, infrastructure rehabilitation and international relations.

President Chamisa stressed that, under his leadership, Zimbabwe will be the best destination for business.

He said the party was concerned about the deteriorating standard of living for the majority of Zimbabweans in the rural areas.

He took time to spell out to the candidates his comprehensive programme for the development and urbanization of rural areas (DURA).

The president reiterated that the MDC Alliance, was poised and ready to assume government and the new team must go out to the people and articulate the party’s SMART policy programme.

He said every one must articulate the party’s agenda to restore the dignity of Zimbabweans and the new developmental trajectory for Transformation, Opportunities and Prosperity.

The aspiring candidates had time to ask questions and interact with the party leadership.

Behold the New.
Change that Delivers