Crisis in Zimbabwe Coalition (CiZC) notes with concern the intransigence and continued disrespect for the constitution being exhibited by President of the Chief’s Council, Fortune Charumbira, who has failed to abide by a court order directing him to retract a statement in which he urged traditional leaders to rally behind Zanu (PF) in the upcoming 2018 polls. 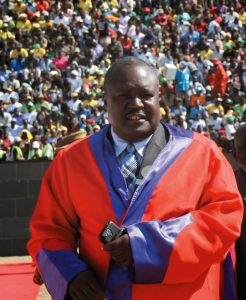 Despite being served with the court order, Chief Charumbira has failed to comply within the stipulated 7 days and now faces contempt of court charges.

His behaviour is a major cause for concern especially given the fact that Charumbira has a well known record of violating the constitution following numerous remarks in which he openly declared his support for the ruling party, Zanu (PF) against the dictates of Section 281 of the constitution.

The case of Charumbira is indeed a litmus test as far as the commitment of the “new dispensation” to upholding the constitution is concerned hence we call upon authorities to ensure that in the case of Charumbira, the law is applied without fear or favour.

CiZC is deeply concerned that Charumbira has chosen to undermine the supremacy of the country’s constitution and his case will definitely take away our confidence in the ability of the so called new dispensation to uphold the law.

If anything, Charumbira’s case indicates a continuation of the Mugabe era during which sympathizers of the regime would violate the law at will knowing fully well that they are untouchable.

Chief Charumbira confirmed our worst fears during a recent meeting on election related violence when he confidently said he had high hopes that his court case would fall by the way side adding that he cannot in any way be compelled to retract his statements declaring support for Zanu (PF).

His stance is a major cause for concern especially as reports of traditional leaders’ involvement in partisan politics continue to escalate ahead of the 2018 elections. CiZC implores the “new dispensation” to walk the talk on respect for the constitution by ensuring that there are no sacred cows when it comes to implementation of the country’s supreme law.