Tomorrow, we are holding a Free and Fair election peace march in Harare. We are meeting at Africa Unity Square, we march to the ZEC offices and present our fully comprehensive petition that speak to the fundamental reforms that need to be implemented before we can hold a free, fair and credible election.

From there, we, proceed to Munhumutapa building to present the same petition to the Mnangagwa administration. We will use Samora Machel Avenue.

We then march taking Second Street to Africa Unity Square where the people will be addressed by the people’s president, Advocate Nelson Chamisa.

This is a crucial time. We must be vigilant as we demand an Environment for credible elections in Zimbabwe.

As long as the voters’ roll has not been audited by credible and an independent external auditor, there cannot be an election.

As long as the securocrats remain entrenched in the ZEC systems and interfere with our democratic right to choose a leader we want, and transfer power to the winning candidate then Zimbabwe cannot have elections.

As major stakeholders in the political affairs of Zimbabwe, we want to participate in the National Logistics Committee so that we run this election in a manner that will produce an uncontested outcome.

We are aware that Zanu has organized it’s overzealous supporters to infiltrate and cause havoc and paint us in the bad picture. We will not have that. We encourage the people of Zimbabwe to exercise restraint in the face of provocation. We encourage the participants not to participate in any act of violence, looting or damage.

As we have said, this is a Free and Fair Election Peace March.

Below is that ZRP letter to MDC-T. 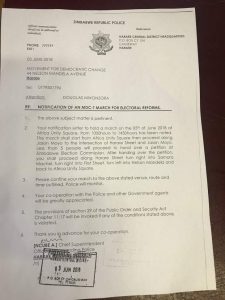