Zimbabwean Movement for Democratic Change (MDC) Alliance leader Nelson Chamisa has reportedly rubbished claims that the opposition coalition intends to rope in former first lady Grace Mugabe so that she can become its deputy president. 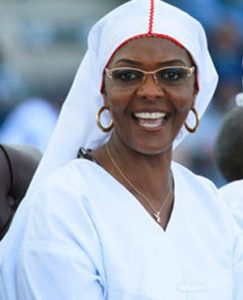 According to the privately-owned Standard newspaper, Chamisa said that it was “unthinkable for Grace to be his deputy”.

Last week a faction of the recently-formed opposition, the National Patriotic Front (NPF), claimed that Grace wanted to be vice president of the MDC Alliance.

The sensational claim was made by Jim Kunaka of the NFP at a press conference on Friday.

The NPF was formed after the ageing former president Robert Mugabe was persuaded to step down in a military takeover in November last year. Reports indicated that Mugabe, 94, was behind the party.

Chamisa said that the nonagenarian’s wife would never deputise him.

“Whoever wants to join us is welcome, our bus doesn’t get full but there is no way one can join a church and become a deacon the same day,” Chamisa was quoted as saying.

The NPF is wracked by divisions. Its founder-president Ambrose Mutinhiri was sacked on Friday (though he refused to accept this). On Thursday Welshman Ncube, the MDC Alliance’s spokesperson, said the alliance had “no desire whatsoever to be associated with the terrible rule of Robert Mugabe”.