Harare - The first person to die of his injuries after Saturday’s grenade attack at president Emmerson Mnangagwa’s rally has been named as Stanley Magunzva. 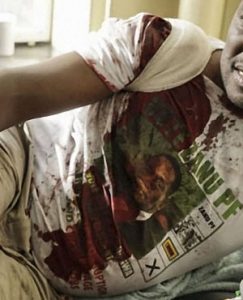 Friends have put up a gruesome picture of his body on social media. The pictures shows stitches right across his face. It’s not clear whether that is a result of a postmortem examination of from injuries sustained when the grenade exploded. It is understood he died yesterday in the intensive care of Mpilo hospital in Bulawayo.

His age has not been given.

Officials have said 49 people were injured in the attack including vice-president Kembo Mohadi, Mary Chiwenga, the wife of vice-president CONSTANTINO Chiwenga and environment minister, Oppah Muchinguri-Kashiri.

The senior government officials have all been flown back to Harare where they are being treated at Mnyame Air Force base.