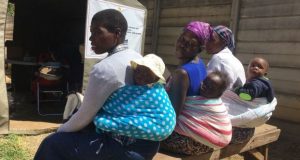 Women wait to have their babies vaccinated at a Harare hospital. Photograph: Harry McGee

There is not much to peruse at the duty-free shop in Robert Gabriel Mugabe International airport in Harare. A couple of bottles of whiskey of dubious provenance stand like lonely sentinels on the vast shelves. As I consider the slim stock, two men approach discreetly.

They lay out a series of banknotes along the shelf like a dealer selling card. They are for astronomical sums, 100 billion Zimbabwe dollars and 50 trillion Zimbabwe dollars. Of course, they were worthless when issued, not enough to pay for a loaf of bread. They are relics from the era of hyperinflation a decade ago in this southern African country, when the country teetered on the brink of bankruptcy. The ironic thing is that the notes, worthless then, have some residual value now.

In a way, the fate of the notes echoes that of Zimbabwe itself over the past 20 years.

When Robert Mugabe assumed power in the 1980s, Zimbabwe, with its huge agricultural output, was known as the breadbasket of Africa. At the end of his 37-year reign, it had become one of Africa’s economic basket cases.

The country was brought to its knees before the ousting of Mugabe last November. Zimbabwe should be emulating the achievements of the two biggest economies, South Africa and Nigeria. Instead it has long been in freefall.

There are many reasons behind that: Mugabe’s form of socialism saw many industries nationalised (all subsequently went bust); the civil wars between the ruling party Zanu PF and its factional rivals; the amassing of foreign debt while eschewing foreign investment; and the increasing corruption in politics as well as rigged elections. It was said that the late Morgan Tsvangirai and the Movement for Democratic Change won the votes in the 2000 elections but lost the count.

One contributory factor was the crude land-grab of white-owned farms done to benefit Zanu PF supporters. The farms were highly efficient but they were broken up and distributed to thousands of small farmers who could not farm with the same efficiency. It led to a collapse of the sector.

Nowadays, Zimbabwe is not thriving. Its growth has been effectively zero for the past seven years. Its foreign debt levels are enormous. It no longer has its own currency, relying instead on the US dollar and South African Rand. Two years ago it began issuing “bonds” as a proxy currency but the experiment has not been successful.

With banks severely limiting the amount of cash that can be withdrawn, investment is almost impossible. Most people now use a local version of M-pesa to get by – the money system that allows people store credit on their mobile phones and conduct transactions by text.

The statistics and economic realities are grim. Witnessing hardship is unavoidable wherever you go. In the high-density neighbourhood of Mbare in Harare, you see the tin shacks, rubbish dumps, open sewers, and overcrowding that are symptomatic of rapidly growing cities in the developing world. Unemployment is high here, and typhoid and cholera outbreaks are common.

In the countryside, in the beautiful mountainous regions of Nyanga, there are different struggles: of poor land, subsistence farming, lack of infrastructure and support, and the increasing perils brought about by climate change including drought and aridity.

The great paradox from visiting Africa is that the overwhelming sentiment you come away with isn’t despair, but hope. People are well aware of the difficulties but they accentuate the positive – almost everybody you meet, in the crowded streets of Harare or in the countryside, tells you they are hopeful of a better future.

In late spring, you can see the obvious potential of this beautiful and strikingly green country as you travel through its interior. It is unmistakably African – with its vast plains, dotted with the distinctive, spreading Marula trees, and its big skies. There are huge tracts of rich agricultural land that once earned Zimbabwe a reputation as the great food provider of Africa. Now its biggest agricultural export is cheap tobacco.

The Victoria Falls has remained a huge tourist draw despite the political turmoil. Zimbabwe is also mineral rich with vast deposits of gold and other precious metals. It has one of the highest literacy rates in Africa with a strong education system and an English-speaking population. In addition, Harare, a pleasant if uninspiring capital city, is one of the safest in Africa.

Much of the hope stems from the promises of the new regime about a more open, prosperous and democratic Zimbabwe. Following the ousting of Mugabe in November, Emmerson Mnangagwa became president. Now 75, he was Mugabe’s deputy for almost four decades. Nicknamed “the crocodile”, he was also Mugabe’s enforcer.

“I never thought he whom I had nurtured, that one day he’d be the man that turned against me,” Mugabe said when he was forced to step down. Afterwards, he said the takeover amounted to a coup d’etat.

Despite his close association with the former leader, Mnangagwa has promised political, economic and societal change. During Mugabe’s years, the country became a pariah, with media tightly controlled and little access for foreign journalists. It was also subject to trade sanctions.

The signs since Mugabe’s departure have been promising. The first official visit by a senior EU figure took place this spring when Neven Mimica, European Commissioner for International Co-operation and Development, met Mnangagwa. The country has promised reforms to stamp down on political corruption, to provide fair and free elections, and to re-engage with international bodies to address its debt and restore its currency and to effect other fundamental reforms. The big test, of course, will be its first post-Mugabe elections to be held next month.

“These elections must be peaceful, transparent credible and inclusive in order to be fair and free,” said Mimica.

“EU sanctions against Robert Mugabe and his wife are still in place because there are still uncertainties of the level of influence that the former president could have in politics in general . . . and his capacity to influence the political stability in the ongoing electoral process,” he said.

“Therefore the sanctions are there and will stay there for a certain period.”

Over the past 15 years, despite not dealing formally with the Mugabe regime during some of that time, the EU has dispersed more than €2 million in donations to Zimbabwe. Over the course of a three-day visit, journalists accompanying Mimica’s delegation were shown a sample of the projects funded by the EU encompassing health, governance, sanitation, agriculture, irrigation and climate change.

In the Edith Oppenheimer Hospital in Mbare, hundreds of mothers wait patiently in long lines, with their young babies in slings, for vaccination shots. The facilities are clean but rudimentary.

Midwife matron Priscilla Mkahanana explains the success of the operation, which recorded no maternal deaths in 2017 or 2018. In another signal of success, most of the HIV-positive mothers are now delivering HIV-free babies because they have access to antiretroviral drugs. This is part of a wider programme to reduce maternal mortality by 50 percent and mortality in under-fives by 50 per cent and to halve the rate of stunted growth in under-fives, which is at 28 percent.

David Parirenyatwa is minister for health, an articulate moustachioed medical doctor. Speaking in Mbare, he says the aim is to decentralise health and have a proper primary care approach. “This is very important for us so we can reach the poorest of the poor for access. Some walk a long distance to go to a clinic. If we can achieve that, we will have a lower mortality rate,” he says.

Parirenyatwa’s father was the first black doctor in Zimbabwe when he qualified in 1957. “[When he began to practice] the health system here was divided into European and white, and African. After 1980 all that changed,” he says, talking of the breakdown of that racial divide. But other problems emerged: “Demand became more and resources became scarce. That is why we are in that situation now.”

A few hours north, Juliasadale is a hillside community with views of jagged blue mountains to the east. Here the soil is productive but sandy and shallow. Traditional methods and over-cultivation would soon make the land fallow. Enter a simple but clever invention – the two-wheeled tractor. This is a Chinese machine that is pushed along by the farmer.

In the past oxen were used. The tractor costs $2,300 (€1,900) and is shared between farmers and can do the work of four oxen. It can plant seed without opening the farrow or the earth’s crust, allowing more productivity. And an accompanying mechanical sheller at $350 (€300) can shell eight tonnes of corn a day. Until now, 12 people a day could shell one-tonne using traditional methods.

Not too far away in Rusape, we see one of 20 irrigation schemes installed in a local project. These harness water from a local river and allow uniform use of water on the crops while conserving the water. In a country prone to drought, the scheme helps prevent crop failures.

A local farmer, Cecilia, stands in her field of butternut squash beside a sprinkler. She no longer has to rely on the rains but can water her crops daily. “This is making my life secure,” she says.

Earlier at a briefing, a senior EU development official, Jobst von Kirchmann, spelt out the climate change challenges for sub-Saharan Africa. For states such as Zimbabwe, it could mean a one-fifth decline in the annual growth periods by 2050. Von Kirchmann also spoke of the prospects of increased aridity, more droughts and water scarcity caused by a 10 percent fall in precipitation.

There was another danger, he said, of people moving from poor rural areas to poor urban areas with little economic activity and high unemployment.

Individually, the EU projects seem like a speck in the ocean given the massive challenges. In reality, Zimbabwe needs thousands of these to realise its potential, and address climate change. There’s no doubt the transition will be a difficult one. But there’s also no doubt that following years of turmoil, the prevailing mood in the country – where people have a positive, uncynical worldview – is one of hope that in this new era it can finally realise its huge potential.