The MAT (Military Assisted Transition) took place in November last year. It is now six months into 2018 and seven months since the MAT. How are we doing? Our world has certainly changed and it is very noticeable. We have more freedom than at any time since the Rhodesian Government clamped down on the Nationalists and detained most of them in 1964. The repressive laws adopted at that time were never dismantled by Mr Mugabe who then used them to repress all opposition in his efforts to establish a one Party State. 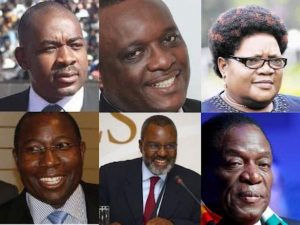 After the MDC irrevocably smashed the one Party State in 2000, these laws were used to try and destroy the new Party and the statistics of that era are scary – an abduction every 24 hours for 17 years of an MDC activist or local leader, several thousand deaths in politically motivated violence and tens of thousands tortured and beaten. Freedom of speech and assembly and association were vigorously suppressed.

None of these repressive laws have been rescinded – they are just being ignored. We do not have to ask the Police for permission to meet, we do not feel that we are being watched or followed when we go about our business, the sense of repression and fear has almost dissipated. It’s a process that has not been formalized (and it’s not permanent until it is) but it’s real and even our visitors from abroad feel the difference when they enter the country.

Before the MAT, a visitor to the country by road would have to run the gauntlet of anything up to 100 police road blocks and almost continual threats and extortion. These have vanished and we do not know what all those men and women are now doing? The almost constant campaign to catch you out for even the most trivial violation of the rules of the road, just to extract spot fines have gone, to be replaced by a sense of near complete anarchy on our roads as Kombi’s drive down the wrong side of the road or race one another to the next pick up point.

Chaotic but it’s refreshing and really African – a bit of friendly chaos providing it does not get out of hand. My son who is a Pastor, called for the police to get back onto the streets to curb the traffic violations and was received with shock by his congregation who are reveling in the new freedom.

Then there is the politics – yesterday was nomination day for tens of thousands of aspiring candidates for the 2500 odd seats up for grabs in the elections now due on the 30th July. There are now 23 candidates for the Presidency and on average there will be any number for individual seats. The MDC called for a march the other day and a near record crowd turned out. Zanu PF Youth announced a rival march but the Police banned it and said they could hold it the following day. On the day there was no interference although the riot Police were in evidence.

Is this real democracy? I inspected the voters roll in my District and found my face on a page with all the details correct. It’s brand new and contains 5,5 million voters and should be reasonably clean. Previous rolls were maintained in secret under military control at a barracks in Harare and were constantly manipulated. There were millions of dead voters on it and it was used to ensure victory after victory for the ruling Party. Having a Constitutional right to inspect the roll or buy an electronic version meant nothing.

There are still problems – no access to the ZEC servers and we all know what that can mean. The Opposition had to go to the Courts to get electronic access to the roll, but that may now happen and will be a first since Independence. But many essential reforms to ensure a free and fair election are still not implemented. However, despite that, my friends in Zanu PF tell me with a big smile – this election will be better that those in Kenya! They also say that it may not be free and fair in the classical sense, but it will be “smart”.

The great difference this time is that international observers and the media are now welcome guests and not “enemies of the State”. We do not have to smuggle them in as “golfers” or to smuggle their footage out once it is captured. The interaction with ZEC, as opposed to that secretive old man at the Registrar Generals Office, Mudede, is completely different – they listen, may not do anything, but at least we have access and get a hearing.

There are over 11000 polling stations and this time we all have to vote at a single polling station with on average about 500 registered voters. I was always very concerned about the polling station based poll – in 2013 when my personal aide went to vote in his usual District he found he had been moved to his rural home, some 700 kilometers away. My own wife of 54 years who had always voted and travels on a Zimbabwe passport found she had been removed because she had been born in SA. It took us two years of Court battles to get her back on the roll. Those days seem to be behind us even though the rules for Citizenship have still not been amended 5 years after we adopted a new Constitution which clearly sets out your rights.

My concern about the real freedom of the voter to exercise their democratic rights in secrecy in a polling station and not face retribution afterwards, remain and whatever happens, will be an unseen factor. Still, this is Africa and we must allow for a gradual assumption of such rights – after all it took Britain 600 years to get there and we could argue that many older States are still not there in all respects. The one thing that is true, is that we are in a much better place to hold a reasonable election than at any time since 1964.

My personal view is that we will get a result in the first round for the Presidency and that this time, whoever wins that exalted post, he will have a real opposition to contend with. In fact, the most interesting part of this election is the outcome in the House of Assembly. I expect almost a hung Parliament with a number of independents who for the first time, will play a significant role. The new Parliament is going to be much more difficult to deal with by the new Executive. Question time is going to be the hottest hour in the week! This will be good for our democracy and it could mean that Parliament will be able to hold the Executive to account.

Local Government is different – the selection process has been chaotic and the average quality of Councilors very poor. There are exceptions but they are few and far between. The problem is that, unlike Parliament where your job is to oversee the State managed by professionals, Councils are small mini Governments with staff and budgets and are directly responsible for all the things that make life livable – water, electricity, roads, sanitation, health and education services. They tax people and are much less accountable than the State. We need, as a country, to rethink how we are managing local government and we need to make the essential changes. I think that Party politics in local authorities has been a retrogressive development since Independence. Directly elected Mayors are an essential going forward.

But that’s for tomorrow – today we have 6 weeks to E Day.