In a paper published in the journal Nature Plants in June 20181 , a causal link was made between the death of several very old baobab trees in southern Africa and climate change. 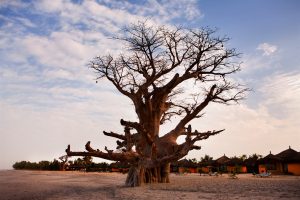 As the members of the African Baobab Alliance, an organization established to promote the
growth of the baobab industry for the benefit of baobab harvesters across Africa, we have
been asked to give our opinion.

This article has had wide-reaching publicity and we are concerned that it has created the
false impression that baobabs as a whole are threatened, and that this could have a
negative impact on the thousands of rural African harvesters who depend on the sale of
baobab fruit to sustain their livelihoods. Many years of work have been devoted to
establishing baobab fruit supply chains that are fair trade, organic and sustainable, and it
would be catastrophic if this work was undone.

Whilst we have no doubt that climate change is a very real phenomenon, and that the
resultant increase in the frequency and severity of droughts in Africa has had serious
negative impacts on vegetation, this does not in itself imply that the baobab population in
Africa is under threat. We are very saddened to hear that the five individual baobab trees
described in this paper have collapsed or died in the last decade. However, they were all
selected for study because of their great age, and it is also therefore true that they were
probably close to the end of their natural lifespan. This may have been exacerbated by
exceptionally dry conditions, but it should not be interpreted to mean that baobabs as a
whole are endangered.

The African baobab (Adansonia digitata) is a highly adaptable and widespread tree that
occurs in a range of different habitats and climatic zones across the continent. Several
country-level studies undertaken within the last decade (e.g the research conducted in
Zimbabwe by Bio-Innovation Zimbabwe in 2014) have consistently concluded that baobab
populations are healthy and sustainable.

Like all vegetation in African, baobab trees are potentially threatened by climate change.
However, the threat is no lesser or greater than for other African tree species. Furthermore,
the consumption of baobab fruit products contribute to their long term conservation and
sustainable management by giving rural communities powerful economic incentives to look
after them. The members of the African Baobab Alliance would like to therefore reassure
baobab enthusiasts that they are free to continue consuming baobab products, safe in the
knowledge that the baobab population is healthy.

For further information on the African Baobab Alliance, please see the following:
www.africanbaobaballiance.org

1 “The Demise of the Largest and Oldest Baobabs” Patrut, A. et al, Nature Plants June 2018