Maputo (AIM) – The National Veterinary Directorate (DINAV) of the Mozambican Agriculture Ministry has imposed severe restrictions on the movement of livestock following separate outbreaks of foot and mouth disease in Nampula, Tete and Gaza provinces. 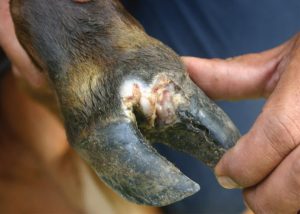 A notice issued by DINAV has announced a total ban on the movement of cattle, goats, sheep and pigs to and from much of the three affected provinces. Meat products from animals in these areas may also not be moved.

Inspection of animals, particularly of the mouth cavity, is now demanded on a weekly or fortnightly basis (depending on the districts) and the results must be reported to DINAV.

In the case of any animals authorised for transfer from the other districts in the country, they must receive a clinical inspection before they are moved, and must be identified individually. Animals being transferred to different destinations must not be moved in the same vehicle, and vehicles carrying livestock must be sealed. When the animals are unloaded, they must be inspected by the veterinary authorities.

DINAV is also demanding the vaccination of cattle in areas within a radius of ten kilometres of the places where the disease has been notified.

Foot and mouth disease is highly infectious and can devastate livestock herds. It is a viral disease that causes high fever, followed by blisters inside the mouth and on the feet (hence the name).

Although foot and mouth disease is rarely fatal to adult animals, infected animals are often killed in order to halt the spread of the disease, since it permanently reduces milk production, and restricts the growth of animals (and hence the meat they can produce).