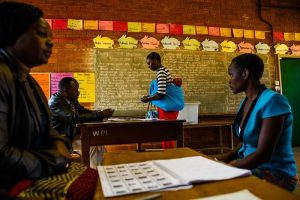 A prospective voter checks her voter registration details with officials in Harare on May 29, 2018. Photographer: Jekesai Njikizana/AFP via Getty Images

Zimbabwe’s Defence Force must respect the outcome of pending elections, two U.S. organizations that will be among international observers at the polls said in emailed statement from the capital, Harare, on Friday.

The International Republican Institute and the National Democratic Institute also recommended several other steps be taken before voting on July 30 if the country is to “make a clear break with its history of flawed elections.” These include releasing the preliminary and final voters rolls in electronic format, affording equal access to media and information for opposition candidates and announcing a final list of polling stations.

“Military officers and government officials should refrain from any statements suggesting that the military would not accept the outcome of the election,” the organizations said.

Zimbabwe is holding the first elections since Robert Mugabe, who ruled for 37 years, stepped down as president in November.