HARARE — U.N. Assistant Secretary-General for Political Affairs Tayé-Brook Zerihoun says he hopes Zimbabwe’s general election next month will be one that “truly reflects the will of the people.” 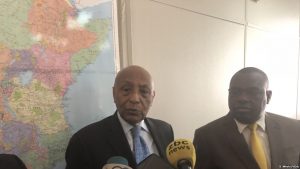 Visiting Harare, U.N. Assistant Secretary-General for Political Affairs Tayé-Brook Zerihoun says he is aware of the issues the opposition had raised regarding the upcoming July 30 election that they want the Zimbabwe Electoral Commission to address.

“We met with the head of the Zimbabwe Electoral Commission [Priscilla Chigumba]. We were given a comprehensive briefing. An encouraging briefing,” he said. “Certainly there are issues to be handled and discussed. There is a positive pre-disposition — in my personal reading — in the way things are going. But at the end of the day the UN agenda is to help countries in their efforts to have as inclusive, transparent, free and fair elections as possible so that the outcome truly reflects the will of the people and therefore accept by all.”

The U.N. official’s visit to Zimbabwe came as opposition parties are complaining the Zimbabwe Electoral Commission has not given them them the voters roll. They want to check that list for possible ghost voters, something that has been an issue in the past. Some parties said they failed to register for July 30 polls because of the commission’s refusal to hand over the voter registration list.

On Wednesday, Jameson Timba, the chief election agent of the main opposition party, the Movement for Democratic Change Alliance, issued a statement saying the Zimbabwe Electoral Commission had “failed to meet its legal and constitutional obligation to provide election materials timely,” including the voters roll, and he urged the body to apologize to the people of Zimbabwe.

Earlier this week, Zimbabwe Electoral Commission chairperson Priscilla Chigumba said despite complaints from the opposition, “nothing short of an earthquake” would stop the election pitting President Emmerson Mnangagwa and 22 other presidential contestants.

Opposition parties have long accused the ruling ZANU-PF party of manipulating the Zimbabwe Electoral Commission to ensure victory at the polls.

The U.N. official’s visit provided some assurance that the international community is watching.