After two months of record heat in the UK, exiled Zimbabweans gathered outside Zimbabwe House in London on the final day of campaigning before Monday’s elections. 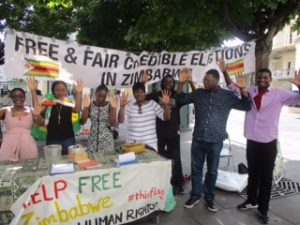 Rain at Chamisa’s last rally at Masvingo was interpreted by the MDC as a good omen. In London, after a prolonged dry spell, thunder and lightning was followed by rain during the night.

The Vigil would like to take this as a good omen too – but, despite Chamisa’s optimism, we have serious doubts he will win in the face of the practiced Zanu PF election rigging.

We are glad so many untainted election observers are on the ground. They will no doubt make it more difficult for Zanu PF to steal the elections. But the Zimbabwe Electoral Commission is a branch of Zanu PF and the best the MDC can hope for is a presidential runoff. In this case, it’s back to the 2008 scenario, with the army probably intervening to keep Mnangagwa in power.

We agree with the assessment of political analyst Simukai Tinhu in his article ‘Boycott presidential poll, Chamisa!’ in the Zimbabwe Independent on Friday (see: https://www.zimbabwesituation.com/news/boycott-presidential-poll-chamisa/). The Vigil expects that next year Chamisa will be repeating what he said of Mugabe as a member of the Government of National Unity back in 2012: ‘The President has provided leadership from the cockpit and we are prepared to be the passengers . . .’ (see: http://www.zimvigil.co.uk/the-vigil-diary/390-wrong-despot–zimbabwe-vigil-diary-7th-april-2012).

The Vigil will be outside the Embassy from early on polling day to hold a mock ballot to test opinion here. We confidently expect Mnangagwa to appear but warn him it’s too hot here to wear a scarf. Chamisa is also expected along with his new supporters Robert and Grace Mugabe.