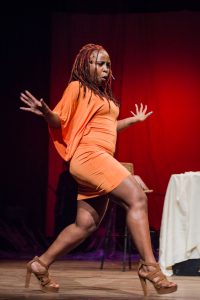 After a performance at home at Bulawayo Theatre on 26 July, the exciting play ‘Blood Tongue, The Musical’ an exciting collaboration between  Zimbabwean and South African artists produced by Nhimbe Trust in Bulawayo in 2017, now heads to the Theatre in The Park stage in Harare on 27-28 July 2018.

The play is written by the award-winning Zimbabwean playwright and author, Christopher Mlalazi, directed by Bafana Dladla (SA) and Eunice Tava, with music composed by Bafana Dladla and Tshepo Pheko (SA) and arranged by Blessing Sitotombe, and scripted, edited and produced by Josh Nyapimbi.

The stirring musical has been staged at the Bulawayo Theatre, Masvingo’s Charles Austin Theatre, and the Artists Preserving Heritage Festival at the Emalahleni Civic Theatre, in Mpumalanga, South Africa.

Scheduled for Harare but upstaged by events in the capital last November, the play as originally produced, explored leadership accountability, the manipulative excesses of the political elite and the struggles faced by strong-willed women in present-day Zimbabwe.  The 2018 edition reflects and strengthens the get-out-the-vote message backed by the outstanding fourteen musical pieces which make up the original score.

The refreshed Blood Tongue aims to encourage citizens to not only exercise their constitutional right to cast a vote for the candidate of their choice, but to exercise this right with a conscience, and with  consideration of how they might hold their elected officials accountable in fulfilling their mandate to serve them.

Tshepo Pheko, one of the musical directors who is also pianist and composer from the SA group Generation2Generation, said “Blood Tongue is a wonderful show and it has a very strong message in the play that needs be heard across the world.  It has a wonderful cast who are willing to learn and have the heart for Art. I’m glad I had the opportunity to work with these amazing souls, creating the music for the show together with Bafana Dladla; it was a great pleasure.”

This Blood Tongue – 2018 Get-Out-the-Vote Tour is made possible by the Bluez Café, Dr. Winterbottom Charitable Fund, Africalia and Rooftop Promotions.