Vice President Retired General Dr Constantino Chiwenga has told the Indian community that they are not aliens but Zimbabwean citizens and should embrace the national development agenda which will spell a new chapter for the country's socio-economic development. 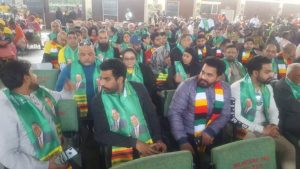 Dr Chiwenga was speaking in Harare at an interactive meeting with members of the Asian community and Zanu-PF supporters who reside in Belvedere, Harare and surrounding areas.

People of the Indian origin have been present in Zimbabwe since the 1890’s when their forefathers who worked as plantation workers in neighbouring South Africa crossed the border into the then Southern Rhodesia.

During the colonial era, Indians together with indigenous Zimbabweans faced discrimination from the colonisers.

Most Indians did not participate in active politics but some of them channelled funds to support the freedom fighters.

When the country attained independence the majority of the Indian community stayed out of active politics but a number of them rose to become prominent people in the Zanu-PF party and in government.

This Sunday, after more than three decades after independence, members of the Asian community demonstrated their solidarity with the government when they convened for an interactive meeting that they had requested with the country’s leadership.

Vice President Retired General Chiwenga said operation restore legacy succeeded because of the multitudes of Zimbabweans of all races and creed who marched together in November last year.

He told the Asian community that they are not aliens and must embrace the national development agenda.

The Vice President urged the Asian community to rally behind the Zanu-PF presidential candidate, Emmerson Mnangagwa as the record of achievements that he has managed to deliver in just seven months that he has been in power is unquestionable.

On elections, Chiwenga said the Bulawayo explosion at a Zanu-PF rally will not deter the Zanu-PF leadership, adding that the government is committed to holding a free, fair and credible election.

He also slammed the MDC-T led Harare City Council for failing to deliver good and reliable service to the people.

Dr Chiwenga urged people to vote for Zanu-PF candidates who will work with the president to bring development to the country.

Professor Hasu Patel, who was Zimbabwe’s ambassador to Australia, New Zealand and Singapore attended the meeting and Vice President Chiwenga paid tribute to a number of Indians who include the late national hero, Kantibhai Patel, who served as a member of the Zanu-PF Politburo and Central Committee, Bharat Patel and Ahmed Ibrahim who served as judges at the Zimbabwe Supreme Court.