The Commonwealth’s team of observers has begun its assessment of the electoral process in Zimbabwe, leading up to general elections on 30 July. 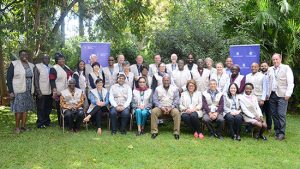 Chaired by the former President of Ghana, John Dramani Mahama, the group is composed of 23 eminent people from across the Commonwealth.  They include specialists in law and human rights, as well as gender, youth and media engagement.

“As independent observers, our mandate is to consider factors that affect the credibility of the electoral process and report on whether the vote has been conducted according to the national, regional, and international standards to which Zimbabwe has committed itself,” said Chairperson Mahama in his arrival statement.  “We will perform our role with impartiality, independence and transparency.”

For Chairperson Mahama, Zimbabwe’s commitment to democratic principles is especially important.  “It was here in Harare, in 1991, that Commonwealth Heads of Government issued a seminal declaration committing their countries to a set of principles, including democracy, the rule of law and the independence of the judiciary, just and honest government; and fundamental human rights,” he stated.

There are 130 registered political parties – of which 57 will be contesting the elections. For the first time, four women are among the twenty-three Presidential candidates.

The two most prominent parties vying for seats are the current ruling party, the Zimbabwe African National Union – Patriotic Front (ZANU-PF) and the Movement for Democratic Change – Alliance (MDC Alliance).

Commonwealth observer missions assess whether electoral processes are credible and transparent.  They promote good governance, reinforce democracy, protect human rights and the freedom of citizens to choose their leaders.