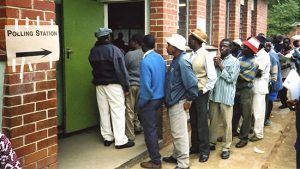 Zimbabwe is not a member of the Commonwealth. It withdrew from the organisation in 2003 after it was suspended for being in breach of the Harare Declaration, which sets out the Commonwealth’s core principles and values.

In May of this year, President Emmerson Mnangagwa wrote to the Commonwealth’s Secretary-General, Patricia Scotland, expressing an interest in re-joining the association, and requesting the Commonwealth to observe its forthcoming elections.

The observation group’s report on the election will contribute to the Commonwealth Secretary-General’s informal assessment of whether Zimbabwe should be readmitted.

“I am extremely pleased to be deploying a group to observe the elections,” stated the Secretary-General.  “Its report on the electoral process will give member countries a clear view of adherence to Commonwealth values in Zimbabwe, including democracy and rule of law plus protection of human rights such as freedom of expression. Our heads of government have said twice, in 2009 and 2011, that they look forward to Zimbabwe’s return. I very much hope that the forthcoming election proves that the conditions are right.”

Following the visit of a pre-election assessment team to the country in June, the Secretary-General has constituted a 24-member team of observers, led by Mr Mahama, the former president of Ghana. He has previously led the Commonwealth teams observing elections in Sierra Leone and Kenya.

The 270-seat House of Assembly is composed of 210 members elected from constituencies and 60 women elected by proportional representation.

Commonwealth observers will assess factors affecting the credibility of the electoral process as a whole. They will consider the pre-electoral environment, the voting process, counting and tabulation procedures and the announcement of results.

The group is independent and will determine in its own judgement whether the elections have been conducted according to the standards of Zimbabwe’s election-related legislation as well as relevant regional, Commonwealth and international commitments.

Observers will act impartially and will adhere to the standards of the International Declaration of Principles for Election Observation, to which the Commonwealth is a signatory.

The Group will submit its report to the Commonwealth Secretary-General, who will send it to the Government of Zimbabwe, its Electoral Commission, political parties and all Commonwealth governments. The report will then be made public.

The Commonwealth Observer Group will arrive in Zimbabwe on 23 July 2018, and will be supported by a nine-member staff team from the Commonwealth Secretariat, led by Katalaina Sapolu, Director of the Governance and Peace Directorate.

The Commonwealth Observer Group members are: