Times like this are most anxious for the diaspora, especially those like us far away from home: a time of swirling rumours and wild assertions. Nowadays it is perhaps worse than ever at election time because we are in instant contact with family and friends in Zimbabwe and constantly assailed by fake news on social media. 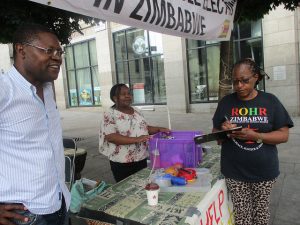 What was clearly not fake was the big support for the MDC demonstration in Harare on Wednesday against what the opposition alliance sees as chicanery by the Zimbabwe Electoral Commission (ZEC). Pictures captured it all: before our eyes we could see thousands of people peacefully demanding change.

The opposition demonstration was in sharp contrast to the Mnangagwa rally last Sunday in Bindura, where soldiers and Zanu PF youths were filmed desperately trying to stop people leaving in droves.

Reports of army activities in the rural areas are disquieting, along with suggestions of a quarter of a million ghost voters. It came as no surprise to see that the UK Times newspaper headlined its report on Zimbabwe on Friday: ‘Voter aged 141 casts shadow on Zimbabwe poll’ (see: http://www.zimvigil.co.uk/vigil-news/campaign-news/951-voter-aged-141-casts-shadow-on-zimbabwe-polls).

The Crisis in Zimbabwe Coalition is the latest civil society organization to say that it doesn’t trust ZEC (see: https://www.zimbabwesituation.com/news/zec-cannot-be-entrusted-to-preside-over-free-fair-and-credible-polls/). But, in Britain, the ’Zimbabwe expert’, Professor Stephen Chan of the School of Oriental and African Studies says he believes Mnangagwa will win without needing to cheat. He speaks in the latest SOAS blog of ‘Mugabe’s winning legacy’ – perhaps no surprise given that Chan was among the academics in the UK who proclaimed Zanu PF’s 2013 election victory as legitimate (see: https://www.soas.ac.uk/blogs/study/zimbabwe-elections-chan/).

MDC leader Nelson Chamisa, for his part, speaks of Russian experts being recruited to fix the results, apparently instead of the previous Israeli Nikuv operatives (see: https://www.zimbabwesituation.com/news/nelson-chamisa-piles-pressure-on-mnangagwa/). Well, the Russians are past masters in fixing elections.