Ahead of the march, Tourism Minister Prisca Mupfumira said international election observers would leave the country with a pleasant story to tell. 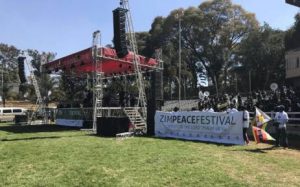 HARARE – Hundreds of Zimbabweans, some carrying the national flag, have staged a peace march in central Harare on Friday ahead of the historic polls.

Brass bands and drum majorettes have marched through the busy central business district, while gospel musicians played on the back of an open lorry.

This was the start of the Zimbabwe Peace Festival, organised by churches and the state tourism authority ahead of Monday’s elections.

The concert and the march are meant to promote peace ahead of Monday’s election.

Despite reports of intimidation especially in rural Zimbabwe and the recent Zanu-PF explosion that claimed two lives, residents there say it’s been a peaceful run-up to the elections.

CEO of the Zimbabwe Tourism Council Paul Matamisa said: “Prayer is very much part of the occasion that we have here, we know that our people have always been peaceful.”

Matamisa has called on to exercise tolerance even after elections.

Ahead of the march, Tourism Minister Prisca Mupfumira said international election observers would leave the country with a pleasant story to tell.

The run-up to these polls has been the most peaceful in years, but opposition MDC Alliance leader Nelson Chamisa has warned the authorities against rigging or cheating.

Some Zimbabweans living in South Africa have mixed feelings about the upcoming historic elections in their home country.

This man has shared his frustration at being exploited in South Africa.

“I’m going to vote for MDC Alliance. I hold a Bachelor of Science. I’ve been working here in South Africa for so many years and we’re being exploited for the reason that we don’t have documents.”

Meanwhile, another man says he would love to go and vote, but is unable to.

“When you’re here you prioritise your work first because we ran away from the government. As much as I’d like to go to Zimbabwe [to vote], I don’t have transport, I have to work and feed my family.”