The Vigil held a mock ballot today outside the Zimbabwe Embassy to mirror the presidential election at home, interacting with passers-by who saw our banner ‘Free & Fair Credible Elections in Zimbabwe’. 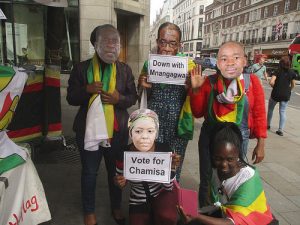 We had four entries on our ballot form: Mnangagwa, Other, Chamisa and Khupe – mainly because the initials read MOCK but also to lampoon Zanu PF’s strategy to divide the opposition vote.

It was only to be expected that Mnangagwa and Chamisa paid us a visit. Everybody was keen to grab a mask and play a role. We were particularly grateful to poor old Mugabe who came complaining of his parsimonious pension and that the roof of his home was sagging. He was accompanied by Grace and they held up posters saying ‘Vote for Chamisa’ and ‘Down with Mnangagwa’.

They were then seen in a tussle to wrestle the ballot box from Mnangagwa who was beating them off with his scarf.

The Vigil’s own electoral commission was led by Muzvare Betty Makoni (founder of the Girl Child Network) who with her team counted the votes. The result were as follows: Chamisa 52, Mnangagwa 4, Others 3, Dr Noah 1, Khupe 1 and spoiled papers 3. Chamisa had a landslide victory with 81% of the votes.

A special thank you to Patience Muyeye who arrived at 8 am. She was followed by other early birds: Yvonne Makombe and Rosemary Maponga, later augmented by Patricia Masamba and Esther Munyira.