The upcoming election should be the dawn of a new era, not the continuation of Mugabe's warped unconstitutional values. 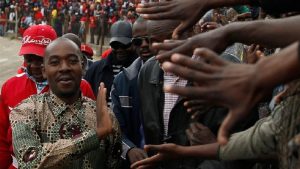 As it prepares to hold landmark general and presidential elections on July 30, Zimbabwe is also trying to come to terms with the legacy of its former president and longtime leader Robert Mugabe.

When he resigned on November 21, 2017, the nonagenarian leader, who had been ruling the mineral-rich former British colony, first as prime minister and later as president, since its independence in 1980, left behind a divided nation and a long-running financial crisis.

His long overdue resignation brought the curtain down on a political career which saw early successes ultimately wiped out by a litany of tangible and agonising failures. His undeniable past achievements – freeing the country from the grip of colonialism, establishing a renowned education system and overseeing equal redistribution of land – have all been tainted by irregularities, abuses and human rights violations over the years.

His rule relied heavily on ethnic electoral machinations established and manipulated by provincial strongmen such as the late Edison Zvobgo, Sydney Sekeramayi and Emmerson Mnangagwa. This ethnic gerrymandering has resulted in expressions of tribalism rising to the surface of Zimbabwean politics and marginalisation of minority ethnic groups in the country.

The emergence in 2014 of secessionist Mthwakazi Republic Party (MRP) is symptomatic of Mugabe’s divisive and weak leadership and failure to unite the nation behind common economic and social objectives. The MRP regularly references the marginalisation of minority ethnic groups from Matabeleland in the mainstream economy and wants to establish a breakaway state.

Beyond fanning the flames of tribalism and unashamedly embedding ethnic divisions into the fabric of Zimbabwean society, Mugabe also normalised political violence and the regular use of youth militias for political ends. The attempted assassination of the former vice president of Zimbabwe’s main opposition party, Movement for Democratic Change – Tsvangirai (MDC-T), during the funeral of former Prime Minister Morgan Tsvangirai on February 19 clearly demonstrates how violence has become a common political tool in Zimbabwe.

MDC-T youths attacked former VP Thokozani Khupe and even attempted to set her on fire because she had resisted Nelson Chamisa’s controversial ascendancy to the presidency of MDC-T after Tsvangirai’s death.

The July 23 bombing at the ruling ZANU-PF party’s election rally in the country’s second-largest city Bulawayo is yet another indication that following Mugabe’s disastrous tenure, all is not well in Zimbabwean politics.

For Zimbabwe to return to some form of normalcy, the country needs to reconcile with Mugabe’s crimes.

The victims of the former president’s political madness – thousands of villagers that were slain in Gukurahundi massacres and their descendants, as well as the thousands who were subject to politically motivated violence, torture and illegal detention by the police, army and Central Intelligence Organisation (CIO) officers – must be acknowledged, compensated and offered rehabilitation services.

Following the July 30 elections, strong and highly independent institutions of justice should be established and lawful accountability and transparency should be introduced to the political arena. All this can only be achieved if the victors of the upcoming election are ready and willing to confront Mugabe’s legacy.

Yet the former president’s legacy now appears to be receiving a makeover, thanks to fresh alliances, tremendous wealth and spin efforts by close family members and former allies who served under him. Both the current administration and the opposition seem to be willing to whitewash Mugabe’s murderous legacy and collaborate with the former president when it is in their interests.

In January, President Emmerson Mnangagwa claimed Mugabe never made any mistakesin his long and turbulent rule. In May, Finance Minister Patrick Chinamasa described him as a principled leader. Even MDC-T leader and presidential candidate Nelson Chamisa spoke positively of the former leader on July 2, when he declared that Mugabe would vote for him in the upcoming presidential poll.

Chamisa’s surprising declaration came after media reports claiming the MDC Alliance (an electoral bloc formed between seven political parties led by MDC-T) had held secret talks with the National Patriotic Front (NPF), a fringe political party established by disgruntled former ZANU-PF members in March. The NFP is associated with Mugabe and reportedly funded by none other than former First Lady Grace Mugabe.

Former NFP President Ambrose Mutinhiri and spokesperson Jealousy Mawarire werepictured with Mugabe at his Blue Roof palatial mansion in March. Later, Mugabe tried to justify his open dalliance with NFP officials in an interview with a local private newspaper – putting Chamisa in an awkward position.

Amid reports that a political pact between the MDC Alliance and the NPF was in the offing, Chamisa had to rebut accusations that he planned to make Grace Mugabe vice president. Mrs Mugabe had allegedly offered to donate $24m and 12 vehicles to the MDC Alliance electoral campaign in return for the vice-presidential position and 82 parliamentary seats for the NFP.

Cometh the hour, cometh the man

Such actions by the oppositions, if they continue, do not bode well for its political future. They can only lead to Zimbabweans losing faith in the capacity of the MDC Alliance to introduce change.

Chamisa shouldn’t be entertaining underhand deals with a political villain or hisdubiously wealthy wife – Chamisa should instead be seeking justice for overlooked and voiceless Zimbabweans. He should publicise the details of the immunity deal Mugabe reportedly got (but doesn’t deserve) and expeditiously reverse that wrong.

Chamisa should show robust leadership and launch comprehensive and transparent investigations into historical injustices committed under Mugabe and stand ready to push for the prosecutions of top government officials, such as Mnangagwa.

The July 30 elections should be the beginning of a new era, not the continuation of Mugabe’s warped unconstitutional values. As a new age dawns, Chamisa shouldn’t help rebrand Mugabe’s disgraceful legacy; he should help rehabilitate a fractured Zimbabwe.

The views expressed in this article are the author’s own and do not necessarily reflect Al Jazeera’s editorial stance.