Two drivers are responsible for the surge in independents. The first is a protest stance; the second reflects the opening up of the political space 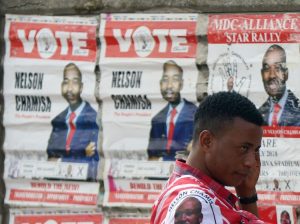 Two weeks ahead of general elections in Zimbabwe, Duduzile Nyirongo, a chartered accountant, will be hoping to become ward seven councilor in the country’s capital, Harare.

She will be vying for political office alongside more than 300 candidates registered as independents in the polls, according to the Zimbabwe Electoral Commission ZEC.

From lawyers, accountants, actors, to businesspeople and lay preachers, Zimbabwe has seen a rise in the number of individuals running for office as independents for the presidential and parliamentary elections, as well as in local government.

The choice to run as an independent candidate is driven by the inability of candidates to choose between the two main parties. Some break it down to the perceived wrecking of the economy by Zanu-PF and the failure by the Movement for Democratic Change (MDC) to deliver on its promises.

“Party politics has destroyed our country; we have had party politics for a long time … I am not going to be in either Zanu-PF or in MDC, they both need to put their house in order. So I decided to play outside and have no political home,” Nyirongo says.

Other prominent independent candidates include, Bryn Mteki, a musician and former Robert Mugabe praise singer, who is running for president; Evan Mawarire, the founder of the #ThisFlag Movement, who is looking to become a councilor in Harare; and Fadzayi Mahere, a lawyer running for parliament in the Mount Pleasant constituency.

In the past, independents have been far and apart in Zimbabwe’s politics. The few notable names include Jonathan Moyo in 2005 and Temba Mliswa, the current independent legislator for Norton. Both were former Zanu-PF members.

Political analyst Eldred Masunungure says there are two drivers responsible for the surge in independents. “The first is really a protest stance by political players, who feel aggrieved by their party’s handling of the primary elections; the second is a reflection of the opening up of the political space where more players can come in … without fear of reprisal by authorities. In that sense, there has been a fundamental shift in the macro-political space since November last year.”

Even then, getting enough votes to win is a tall ask for an independent. Harare resident Patience Phiri says voting for an independent candidate would depend largely on whether the candidate has demonstrated knowledge of the task ahead. “I am not going to try and put into power a hungry and clueless person, as that will only worsen my own situation,” she says.

But such feelings are not enough to dissuade Nyirongo, a former activist. She says she got tired of “just making noise and going to demonstrations” with little change to show for it. “I said to myself, if there is a gap in skills, such as in audit committee and a need to set policies, we are the people who are able to do that. So I decided to give back to the community, as my skills are needed at community level.”

However, for others such as Jessie Majome and James Maridadi, two prominent legislators in the MDC led by Nelson Chamisa, running as independent candidates was precipitated by a fallout with the party leadership. Last week, the MDC said legislators who had decided to stand as independent candidates against party orders were considered fired. “They have ignored the party in breach of our constitution, something that means automatic dismissal,” says Morgan Komichi, the MDC chairperson.

Without the backing of a political party, the campaign trail is also an expensive affair.

Nyirongo raised $6,000 through crowd-sourcing to fund her campaign activities, which include printing brochures, flyers, posters, T-shirts, and paying for social media adverts. “It has not been easy to get campaign funds — financial constraints are my biggest challenge. I have raised about $6 000, but it’s not easy as people don’t have money.”

Nyirongo’s budget is dwarfed by the reported $200m war chest the Zanu-PF has for the election. The ruling party has spent a lot on billboards, posters, T-shirts and media adverts.

Again, with no party backing, independent candidates also have to rely on volunteers to assist with their campaign. “Because people are volunteering, they are not there 100%,” Nyirongo says, as she concedes her Zanu-PF rival has the advantage of having the party’s existing structures at his disposal. “He is well-off and has money. In the ward we are both contesting, he has also given people soap, sugar and about $2 each to vote for him.”

Tough as the going might be, tough for independents, collectively they could break the dominance of political parties, potentially turning the country’s politics on its head.