We are disgusted and utterly dismayed by the Zimbabwe Electoral Commission’s continued manipulation of the election in clear violation of the law, the constitution and complete disregard for transparency and fair play. 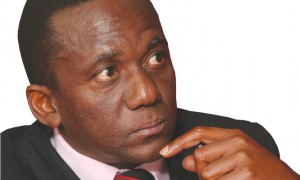 This morning, I met with the ZEC chairperson to raise import issues pertaining to the management of the election. She has failed to provide answers on the critical issues.
ZEC has in a space of a few days committed or omitted the following acts that go to the heart of transparency and ultimately the credibility of the election.

1. Despite assurances and announcing that ZEC was going to provide the true and accurate BVR Voters’ Roll as a pdf file, no such Roll is being provided. The real question is why is ZEC deliberately lying to the world or is ZEC actually lying or perhaps just handicapped to implement its own decision?

a. ZEC has refused to avail the Voter’s Roll as required by Law

b. ZEC has refused an independent audit of the Voter’s Roll because they know it is illegitimate

c.  Our own random audit has unearthed scandalous and embarrassing details on the Voter’s Roll.

d. We have discovered some of the oldest people on our Voters’ Roll aged around 150 years old who don’t exist

e. We have discovered many houses that have tens of people registered but the houses do not exist

f.  We have discovered many people with the same IDs

g. We have discovered many people with same IDs for different faces of people

2. Despite assurances that political parties were going to be allowed to observe the printing of ballot papers; ZEC invited parties to the printers three days after the printing had already commenced. Further no observation was allowed but instead parties were just pointed, at a distance, through glasses of the purported printing process i.e.

a. no printed ballot paper was inspected

b. the actual quality and features of the ballot paper are not known other than a blank sample of what looks like a gift-wrapping paper

c. the design of the ballot paper is not known

d. the print run for the ballot papers is not known by anyone either than ZEC and Mnangagwa as a candidate because his government owns and controls the printer

e. whether that was the actual printing process and not just an act is not known

f. whether the people who were purportedly working on the printers are employees of fidelity printers is not known

g. whether fidelity printers has not been hijacked is also not known

h. as it stands only Mnangagwa and Chigumba know the quality, design, quantity of the ballot paper.

i. as it stands only Mnangagwa and Chigumba know about the alleged secret ballots that are reported to have been imported from Russia over the weekend

4. ZEC has lied in their agreement and undertaking that the ballot paper will follow the precedent and traditional alphabetical arrangement of candidates

5. The reason why it did not allow observation is that it has manipulated the design of the ballot paper in favour of the Zanu-PF Presidential candidate wherein they have printed a ballot paper which puts Emmerson Mnangagwa on top.

6. ZEC is refusing to give any concrete guarantees on the storage and distribution process of the ballot paper which is a key component of the transparency required.

In view of all this, we are making the following demands:

A. ZEC must either carry out the agreed positions for transparency and accountability purposes or be reconstituted

B.The printing of the ballot must immediately stop and be carried out in a transparent manner

C. There must be an open tender of the printing company

D. The inspection of the ballot must be done in terms of the agreed procedures

E. There must be stakeholder participation in the storage and distribution of the ballot paper to polling stations.

F. The Zimbabwe Electoral Commission is fooling not only the MDC Alliance but Zimbabweans and the international community at large.

G. We have demanded a Multi-Party Liaison Committee.

Unless the Zimbabwe Electoral commission is stopped, there is no chance of a free, fair, credible and legitimate election taking place on the 30th of July 2018.

ZEC has been indicating left and turning right at every junction. The real questions are: why is ZEC, a Constitutional Body that is supposed to be independent acting in this manner? Is ZEC actually in charge of this election? Is all the reneging on agreements and assurances not because ZEC has no power to carry out its operations? Who is running ZEC, then?

I have flagged these issues with our Principal President Chamisa. This election cannot happen under these conditions.

In conclusion, we are sure Zimbabweans will not be railroaded into a sham election to sanitise an illegitimate election meant to steal their hope.