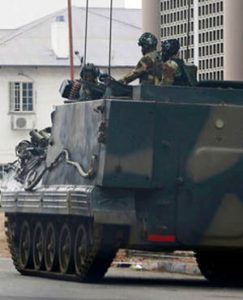 The military is under close scrutiny following its brief takeover in November that led to the resignation of former president Robert Mugabe.

Previous elections under Mugabe were marred by violence, intimidation and fraud – often alleged to involve the security forces.

“The Zimbabwe Defence Forces has no direct role in the upcoming elections,” said army spokesperson Overson Mugwisi at a media conference in Harare ahead of the presidential, parliamentary and local polls later this month.

“We are disturbed by false reports alleging that the Zimbabwe Defence Forces is going to be used by (the ruling) Zanu-PF to rig the posted vote.”

The army appeared to have staged its media briefing in response to a report in the Standard daily that it had deployed active service personnel to rural areas to campaign for candidates in Zanu-PF primary contests.

The Standard reported that it had received complaints from defeated contenders for the Zanu-PF slate who reported that some winning candidates who were former senior military officers had been “roping in the army to win the primary elections”.

“If some serving members are participating in the ongoing political campaigns, they will be doing so illegally and not as a result of an instruction from their commanders,” said Mugwisi.

“The conduct of the Zimbabwe Defence forces after elections is going to be guided by the constitution.”

President Emmerson Mnangagwa, 75, has pledged to hold free and fair elections as he seeks to mend international relations.

July’s polls will be the first ballot box test for Mnangagwa, and the first since Mugabe was forced to resign after 37 years in power.