ALLEGANY — All his life, Colin Zwakavapano of Zimbabwe has dreamed of visiting America. 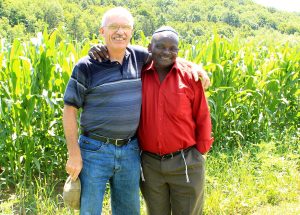 Colin Zwakavapano of Zimbabwe (right) is visiting the U.S. at the invitation of his good friend Patrick Eaton of Allegany, who met him on his first of seven missionary trips to Zimbabwe four years ago. Zwakavapano, 65, who has dreamed of visiting the U.S. all his life, is finding things are quite different than in the movies.
Rick Miller/Olean Times Herald

Four years ago, Zwakavapano met Patrick Eaton of Allegany who was in Zimbabwe as a member of the Jewish Voice Ministries’ medical outreach program.

The two struck up a friendship, despite Zwakavapano’s wariness of white men, that has deepened over the years. The country was formerly named Rhodesia, where a white minority ruled the country. In 1980, Robert Mugabe became Zimbabwe’s first democratically elected president.

Eaton, a former Allegany supervisor, has returned to Zimbabwe six times and has plans to go back again in August. He invited Zwakavapano to visit the U.S. when he realized how much it would mean to him.

On Wednesday, they visited Niagara Falls. Then on Thursday, Eaton took him to Sprague’s Maple Farms Restaurant in Portville where he tasted maple syrup for the first time and fell in love. Zwakavapano smiled broadly while Eaton talked about maple syrup.

The two met after Eaton decided to help Jewish Voice Ministries and ended up in Buchera, in eastern Zimbabwe.

“After I ran for the Assembly in 2008, I wanted to do some missionary work,” Eaton said. “I did some research and felt Jewish Voice, which did medical outreach, was my best choice.”

Jewish Voice Ministries offered free medical care to up to 10,000 people a week, Eaton explained. Patients are then advised that they may meet with a prayer and counseling team, of which Eaton is a member.

“We teach them who Jesus was,” he said.

The people Jewish Voice Ministries are reaching out are part of what Zwakavapano calls “the Scattered People,” and others refer to as “The Lost Tribes of Israel.”

Zwakavapano’s tribe is the Lemba, part of the Scattered People. He is a pastor in Jewish Ministries.

“It is like going back in time,” he says of the rural area where residents can’t afford healthcare and often turn to homegrown religions and witch doctors.

The Lemba keep their own culture while living among other tribes, Zwakavapano said. Their religious observance is only slightly different than that of Orthodox Jews.

“I’ve learned a lot from him (Eaton),” Zwakavapano said. “Even if he is a Gentile. We were all created by God and Jesus is the savior.”

Eaton said he has seen medical miracles from praying for members of the Lemba who come to the free medical clinics. It can be very emotional,” he said. “It reaffirms your faith in Jesus.” The ministries volunteers come for two weeks at a time.

“I was a stranger,” Eaton explained. “Zwakavapano told me they did not trust me at first. With each success, we got stronger.”

Zwakavapano replied: “We trust you now.”

Eaton said, “The men didn’t really talk to each other. It is seen as a sign of weakness. We teach them about being fathers, husbands and leaders. The men’s ministry has grown.”

Zwakavapano said through the teaching about Jesus and counseling, his people understand “we believe in the same thing. We are united by the word of God.”

He said, “God opened the way” for his visit to the U.S., and Eaton and his family “opened the doors of their home. It is very much appreciated. I didn’t expect such hospitality,” he said, noting, when Eaton comes to his country, “he sleeps in a tent in the bush. They treat me like family. Their grandchildren call me Grandpa Colin,” he smiled.

Zwakavapano said he has seen a subtle change in the way Lemba men treat women and their children with Jewish Voice’s teachings “to worship God and respect women.”

“The spark has grown into a big light,” he said. “There is a big change in people’s attitudes.”

Eaton said he’s returning Aug. 21, after the Zimbabwe elections, and he expects an even bigger response this year.

“We set up tents on Saturday and have the first clinics on Sunday for half a day. Then its full days until we pack it up after a half day on Friday. There’s no wasted time. This is not a vacation. It is very emotional.”

Eaton said since only about 30 percent of the people coming to the clinics speak English, he often has to use an interpreter. “They just want to know there is help.”

Zwakavapano said he is looking forward to his country’s first fair and free democratic elections at the end of this month. Mugabe was overthrown by the military last November and the interim president, Emmerson Mnangagwa, Mugabe’s vice president, has promised fair and free elections.

No matter what the outcome of the election, he said the country faces many obstacles including different ways of paying for goods, including U.S. dollars. It seems like someone is always discounting the currency. Individuals are limited in what they can withdraw from banks.

“It’s a beautiful country,” Eaton said, “It has fertile ground and a good tourism prospect.”

Zwakavapano agreed his country was beautiful. “No matter what the outcome of the election, I hope for a unity government.”

Eaton said, “We have prayed for their government. These elections are an answer to our prayer.”

Zwakavapano, who leaves for home at the end of next week, said he is glad to have had the chance to visit the U.S.