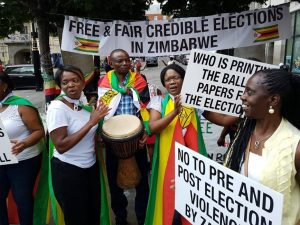 Mr Mwananga comes from the Democratic Republic of Congo, an otherwise very rich country which unfortunately is bridled and entangled in tribal and civil wars for decades. Such a background should usually embolden a person such as Mr Mwananga to support Zimbabweans in advocating for absolute freedom from the shackles of Zanu Pf. For the past three decades, Zimbabweans have been suffering political persecution, harassment, torture, abductions at the hands of Robert Mugabe, Emmerson Mnangagwa, Joyce Mujuru, ZRP and the Army. Coincidentally Mr Mwananga has been living and working in Zimbabwe during such a torrid time for Zimbabweans but surprisingly he has never raised a single voice against the apparent dictatorship and suppression of basic human rights.

Mr Mwananga falsely believes that freedom in Zimbabwe is granted by the government and that this time the government has given too much of it hence it is being abused. Let it be categorically stated to Mr Mwananga and any other misled African diplomats that our freedom is derived and enshrined in the constitution of Zimbabwe. Therefore, all arms of the state, politicians included, are bound to respect and allow us our constitutional freedom. Let us not be misled by Mr Mnangagwa or ZEC’s piecemeal reforms which Mr Mwananga is singing praises about. This time Zimbabweans are demanding complete freedom. We want a wholesale change, a paradigm shift from 38 rotten years of dictatorship and corruption that Zimbabweans suffered under the brutal rule of Zanu pf.