The Church in Zimbabwe said it is prepared to mediate between government and opposition leaders after six people were killed in violence that followed a disputed presidential election. 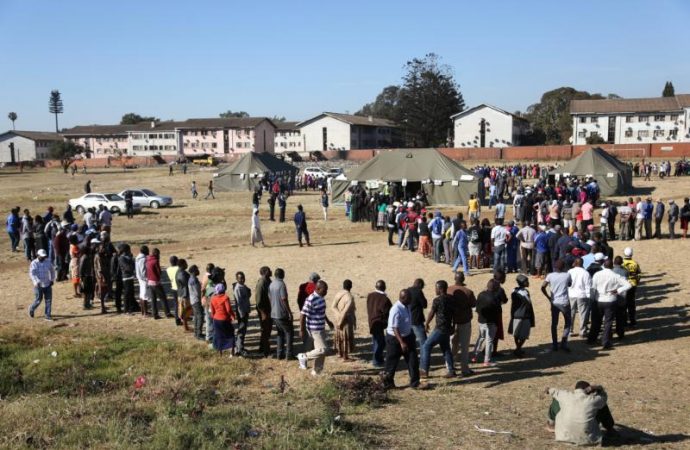 People wait in line to cast their ballots in general elections July 30 in Harare, Zimbabwe. (Credit: Siphiwe Sibeko/Reuters via CNS.)

CAPE TOWN, South Africa – The Church in Zimbabwe said it is prepared to mediate between government and opposition leaders after six people were killed in violence that followed a disputed presidential election.

“We have offered to mediate any election disputes as well as broader concerns,” Father Frederick Chiromba, secretary-general of the Zimbabwe Catholic Bishops’ Conference, told Catholic News Service Aug. 6 in a telephone interview from Harare.

With their parish and other structures, Zimbabwe’s churches would be well positioned to lead the activities of the national peace and reconciliation process that began early this year, he said.

Emmerson Mnangagwa was declared the winner in voting July 30, but opposition leader Nelson Chamisa has disputed the result and said he will challenge it in court.

Mnangagwa succeeded Robert Mugabe, who had led Zimbabwe since its independence from Britain in 1980, after a military takeover in November.

“We condemn the killing of the demonstrators and all the ruthless force used” by the army and police, the Catholic Commission for Justice and Peace in Zimbabwe said after security forces in the capital, Harare, shot at protesters who accused the government of vote-rigging.

Noting that the use of live ammunition to restrain unarmed civilians was “too extreme” and violated basic rights, the commission also criticized the protesters for violence including destruction of property.

It urged the security forces to apologize, particularly to the bereaved families.

“Saying ‘sorry’ would open doors for healing and rebuilding of good relationships between citizens and their defense forces,” the commission said in an Aug. 2 statement signed by commission chairman Bishop Rudolf Nyandoro of Gokwe.

Zimbabwe’s churches could mediate an “all-sides confidential dialogue,” the commission said, noting that “an inclusive, objective, internally constructed process” is needed to resolve the electoral conflict.

The challenges Zimbabwe faces “are much deeper than the elections,” Chiromba said. “There is still a lack of trust between the people and government” at all levels and the country’s churches have “a big role to play in restoring that trust,” he said.

“If we can manage to move forward as one people,” much-needed development will follow, he said.

Most people in Zimbabwe, with a population of nearly 16 million, survive on $1 a day. They eke out a living in small-scale informal trade, mostly selling goods bought in South Africa.

“Investors were waiting for these elections. Now that they are over, we hope that Zimbabwe will be admitted into the community of nations, which will help in job creation,” Chiromba said.

Mugabe’s policies are widely blamed for the country’s economic decline over the last two decades.

“There is now a conscious, sustained effort to restore the nation” and the economy “is in the early stages of recovery,” Chiromba said.