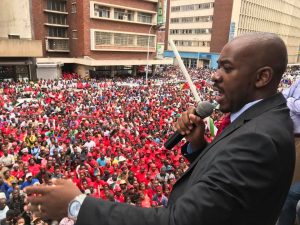 So, following the Constitutional Court (ConCourt) ruling, Comrade Emmerson Mnangagwa has been inaugurated and we expect him to deliver Zimbabwe out of the economic messy his party put the country into. We wish him good luck in that, but in my opinion, it will be an uphill struggle as he is only ruling on the mandate of ConCourt, not on the mandate of the people.

While I am not a lawyer, I should say that while ConCourt insisted on primary evidence, there was some primary evidence which was submitted and they ignore, for example there was a big story in the original V11 forms which Thambani Mpofu produced in the court, which was part of the evidence to support the affidavit of an MDC Alliance agent who was visited by men who wanted to force her to sign a V11 form, and ended up raping her and sodomising her husband. Surprisingly, Justice Malaba dismissed that primary evidence. There were other affidavits as well that the MDC Alliance lawyers had filed as evidence, and in my opinion, an affidavit, whether submitted as a photocopy, is primary evidence – there may only be need to verify with the original for purposes of authenticity of the document.

In my opinion, the Chief Justice was contradictory in that he said while they could dismiss a case on technicalities, the case at hand was so grave that while Chamisa had submitted his petition “late” to the first and other respondents, ConCourt would still handle the case on its merits, and that should be applauded. Ironically, some evidence which was similarly submitted “late” could not be accommodated. This leaves egg on the face of each of the nine judges. If the decision was to handle the matter on its merits, that rule should have been consistently applied.

Also mind boggling is the fact that while the ConCourt bench said the case had to be tried on its merits given the gravity of the case,  they should equally have allowed other parties which had been cited in the application an opportunity to give the evidence they had.

Where I think ConCourt failed most was to ignore the fact that ZEC’s own figures were not balancing. The number of Presidential votes cast over and above the number of votes cast for parliament were on their own evidence that ZEC had messed up, and regardless of who had won, the Presidential election had to be done afresh as it did not tally with the requirements of the constitution. It was for the bench to grill ZEC why the numbers were not adding up, why ZEC had single handed change the voting statistics three times without involving any of the contesting parties – unless of cause if some were privately informed when those changes were being made.

To add to that Thambani Mpofu told Court that a ZEC official had admitted that at a polling station in Belvedere some unregistered voters were allowed to vote. And this was accepted by the ZEC official, justifying nullification of the results. The Belvedere case could be one of many such cases which would have gone unnoticed, but enough to conclude that the election was not free and fair and therefore the result had to be nullified.

I am proud of Chamisa of taking the case to the African Commission for Human and People’s Right, even though some arm chair critics are trying to discourage him saying this is a waste of time. Yes, I know that commission may not be able to reverse the decision made by ConCourt, but I hope it will allow Chamisa to clarify some issues that had been supressed by ConCourt that the world should know. And Chamisa should not end there – he should use every other international avenue available to him, the United Nations, International Courts and all other places – some of whom may have an ear to listen.

The situation that Zimbabwe finds itself in will result in perpetuated oppression and abuse of human rights tactfully applied on the people of Zimbabwe in a manner that does not generate primary evidence which the ConCourt may like, but the individuals knowing too well that Zanu PF and ZEC indeed colluded to steal the people’s victory.

If the liberation war freedom fighters gave up, Zimbabwe would still be a colony today.