HARARE-Harare Magistrate Francis Mapfumo will on Thursday hand down his ruling on an application filed by Tendai Biti, one of the MDC Alliance party leaders challenging the jurisdiction of the court to hear his matter considering the circumstances surrounding his arrest and return to Zimbabwe. 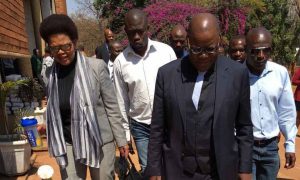 Biti, who is out of custody on $50 bail, was arrested early this month and charged with contravening section 66 (A) (1) of the Electoral Act for allegedly announcing unofficial presidential results for the 2018 harmonised elections held in July and with committing public violence as defined in section 36 of the Criminal Law (Codification and Reform) Act. Prosecutors alleged that Biti purportedly announced the results of the presidential election on 31 July 2018 and declared that MDC Alliance party leader Nelson Chamisa had won the presidential election before the Zimbabwe Electoral Commission (ZEC) had announced the official results.

The prosecutors also claimed that the MDC Alliance party leader incited some of his supporters to commit public violence and pulled down an election campaign banner for ZANU PF party leader Emmerson Mnangagwa and burnt some vehicles and property worth $345 000.

But Biti, who is represented by Beatrice Mtetwa, Alec Muchadehama, Harrison Nkomo and Gift Mtisi of Zimbabwe Lawyers for Human Rights argue that the opposition political party leader is unlawfully appearing in Zimbabwean court as he was abducted from Zambia and unlawfully brought to Zimbabwe in breach of international customary law as he ought to have been appearing in the Zambian High Court on 09 August 2018 for a determination of his political asylum status.

Biti told Magistrate Mapfumo that he was forced to seek political asylum in neighbouring Zambia as his life was under threat from political persecution by some unidentified people who terrorised him, his family members and his domestic workers.

The opposition party leader charged that he continued to face persecution despite his lawyers from ZLHR having made enquiries to Zimbabwe Republic Police Commissioner-General Godwin Matanga and ZRP members whether the law enforcement agents were after him.

Biti said his rights were violated as he was unlawfully taken away from Zambian territory by some unidentified Zimbabwean people in defiance of a court order issued by the High Court in Zambia which stated that the opposition political party leader should remain in the custody of Zambian Immigration officials who were supposed to facilitate his appearance before Justice Yangailo on 09 August 2018 for the hearing of his application for review regarding his deportation to Zimbabwe.