The dream of a new Zimbabwe alive with the possibilities of economic regeneration and freedom appears to have faded for many economic refugees living in South Africa and the diaspora just days after Zanu-PF’s Emmerson Mnangagwa emerged as the new president. 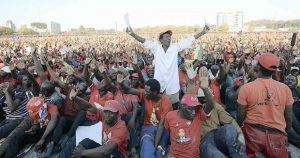 Some Movement for Democratic Change supporters claim the poll was rigged in favour of Zanu-PF yet again, citing the magnitude of the rural vote for the ruling party candidate. Picture: Matthews Baloyi/African News Agency (ANA )

There was optimism and a sense of relief when the country went to the polls to vote for a new president in the post-Robert Mugabe era. But the euphoria has since waned and many eking out a living here now doubt there will ever be change.

Some Zimbabwean migrants living in South Africa have vowed not to return to their country of birth any time soon.

Sandra Dube, from Berea, said she believed the elections were rigged in Zanu-PF’s favour.

“Its not even fair.

“We have suffered enough. I personally don’t believe that ED (Emmerson Mnangagwa) won the elections.

“They rigged them the same way Mugabe did for all those years. I won’t accept that the elections were free and fair. No ways.

“Who in their right mind still votes for Zanu-PF really? No ways. This life is not fair to us. We can’t even be with our loved ones because of Zanu-PF. We need serious people to look into this rigging.

“Zanu-PF has failed us since 1980 and there is no way this will change. All they think about is their pockets, not the people,” said a visibly frustrated Dube.

Asked if she would be returning home, she said: “No. Zimbabweans can’t go back home. In fact, Europeans countries should start giving Zimbabweans asylum.”

Dube also lambasted the army for its heavy-handed treatment of the Movement for Democratic Change (MDC) Alliance protesters.

The announcement of the parliamentary results turned violent when MDC Alliance supporters took to the streets to protest against the official results and six people were gunned down by the military.

“The Zimbabwe National Army didn’t treat fellow Zimbabweans well. They should have let the people protest and hear our cries, but instead they fired bullets,” said Dube.

Sibonakaliso Sibanda, from Hillbrow, shared these sentiments, saying it was daylight robbery of citizens’ right to vote.

She added that Zimbabwe was now a military state and called on Zimbabweans not to go home.

“The only thing that * can say to my fellow Zimbabweans is that we have to fight for our rights.

“How come Zanu-PF is the winner in rural areas? This means they robbed our grandmothers into voting for them. Did you see anyone celebrating on the streets? People are angry.

“That is why we didn’t go and vote because we knew the MDC would be robbed of our votes. We ran away from Zanu and we cannot go back to Zanu again and leave our jobs,” said Sibanda.

Adolf Ndlela, from Olievenhoutbosch in Centurion, who has a cross-border transport business, said he did not foresee a better future in Zimbabwe based on what transpired.

“He will punish us for not voting for him. As you can see, since he took over, we now pay a lot of duty at the border,” he said.

However, Gugulethu Ncube, who called herself a proud and unapologetic member of the Zanu-PF Youth League, and is based in South Africa as a student at the University of Pretoria, said she was “over the moon” with the outcome.

“Today is the dawn of a new Zimbabwe. I am so happy. Zimbabwe is open for business. As the youth of Zimbabwe, * have confidence in the president.

“I am confident Zimbabwe will soon have its own currency. Within the few months since ED has been in charge, we have seen some improvement in our country and would love to see Zimbabwe become the breadbasket of Africa again,” she said.