Zimbabwe’s constitutional court will preside over a landmark case in which MDC Alliance President; Nelson Chamisa is seeking nullification of the July 30 elections whose outcome was in favour of Zanu PF’s Emmerson Mnangagwa. 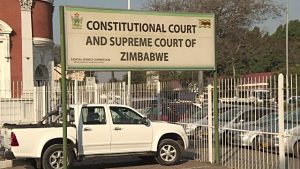 The July 30 elections were marred by several irregularities as witnessed by events that obtained pre and post the election period.

Chief among the irregularities included the controversy around the printing, storage and transportation of the ballot papers as well as the issue of the voters’ roll.

It has to be noted that Zimbabwe’s Electoral Court set before contestants were issued with the voters’ roll and this was against recommendations by regional missions to the 2013 Zimbabwean elections while logistics around the printing and distribution of ballot papers remained a top secret.

This came at a time there was an apparently unholy alliance between the Zimbabwe Electoral Commission (ZEC) and Zanu PF.

The Elections Logistics Committee, which is tasked with the running of elections, remained a top secret as well amid allegations that it was staffed with Zanu PF sympathizers and members of the military.

In the run up to the elections, it became crystal clear that transparency and accountability were largely lacking on the part of ZEC which had apparently been militarized following the November 2017 coup which deposed former President, Robert Mugabe.

Other irregularities prior to the July 30 elections included the issue of soldiers as well as traditional leaders being deployed to campaign for Zanu (PF) in the rural areas against the dictates of the country’s supreme law.

There was also an attempt to steal postal votes and this was unearthed at Rose Camp police station in Bulawayo on July 12, 208 when it was exposed that members of the police force were being made to vote under the watchful eye of their superiors who were directing them to vote for Zanu (PF).

At that time, the ZEC Acting Chief Elections Officer, Utoile Silaigwana connived with the state media and flatly refused that there was postal voting taking place.

The State media, and in particular The Herald, would go on to pull down the story from their website after the Zimbabwe Republic Police (ZRP) confirmed that indeed postal voting had taken place.

During the pre-election period, vote buying and intimidation were quite rampant as well while the State media operated as more of a Zanu PF mouthpiece against the opposition. A number of top leaders in ZANU PF publicly intimated that the military would not respect any electoral outcome that was not in favour of the ruling party.

On voting day, several bogus polling stations were exposed while in some areas, opposition election agents were threatened and chased away from polling stations. There were alarming cases of assisted voters with Masvingo Province in particular recording very high numbers.

A number of ZANU PF activists were also seen milling around polling stations recording details of those who had voted.

In the Gokwe-Chireya area, a number of traditional leaders either stood as candidates of the ruling party or were chief election agents in direct contravention of the Traditional Leaders Act

The transmission, counting and declaration of results was a serious cause for concern with ZEC admitting data capture errors. This in itself is a pointer that ZEC was not prepared to run a credible election and lacked the necessary expertise as the tallying of votes is marred by inaccuracies

In as much as ordinary Zimbabweans are pinning their hopes on the constitutional court application, there are genuine fearsamong the ordinary citizens.

The fears among ordinary Zimbabweans, (captured through snap surveys) are premised on the following

As Crisis in Zimbabwe Coalition, we reiterate our position that the July 30, 2018 elections were marred by several irregularities, pre and post the election period and thus failed the credibility test. It is our view that the attempt at sanitizing the November 2017 coup through a shady electoral process has bred and perpetuated a state legitimacy crisis. We abhor the attempts by Zanu PF to force ordinary citizens into submission through arbitrary arrests, intimidation as well as the bullet. In our view the post Mugabe dispensation saw the rise of hardliners in the ruling party backed by the military who have shown little commitment to reforming our political space. In the interregnum Zimbabwe’s transition to democracy has regressed to the 2008 stalemate.

More importantly, we however would like to put it on record that the credibility of the July 30 elections as well as legitimacy of the next government would heavily rely on a credible and progressive outcome from the constitutional court process.

We are disturbed by reports of Zanu PF trying to stick to its old ways of influencing court processes and outcomes.