HARARE-Opposition political party leader Tendai Biti last week chronicled his persecution ordeal which forced him to seek political asylum in Zambia in yet another blemish on President Emmerson Mnangagwa’s administration. 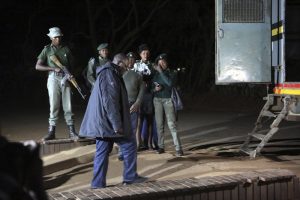 ‘Biti said the unidentified people who harassed him confiscated his two vehicles after shooting at them in Harare for unknown motives and ransacked his mother’s and his friend’s residences.’

Biti, a human rights lawyer and one of the MDC Alliance party’s leaders told Harare Magistrate Francis Mapfumo on Friday that he was forced to seek olitical asylum in Zambia as his life was under threat from political persecution by some unidentified people who terrorised him, his family members, his six-year old nephew and his domestic workers, who were harassed and at one time had their mobile phones confiscated as the unidentified persecutors hounded him.

Biti said the unidentified people who harassed him confiscated his two vehicles after shooting at them in Harare for unknown motives and ransacked his mother’s and his friend’s residences.

The opposition party leader charged that he continued to face persecution despite his lawyers from Zimbabwe Lawyers for Human Rights having made enquiries to Zimbabwe Republic Police Commissioner-General Godwin Matanga and ZRP members whether the law enforcement agents were after him.

Biti said his rights were violated as he was unlawfully taken away from Zambian territory by some unidentified Zimbabwean people in defiance of a court order issued by the High Court in Zambia which stated that the opposition political party leader should remain in the custody of Zambian Immigration officers who were supposed to facilitate his appearance before Justice Yangailo on Thursday 09 August 2018 for the hearing of his application for review regarding his deportation to Zimbabwe.

Biti returns to court on Wednesday 15 August 2018 for the continuation of the hearing of his complaints against his persecution and the violation of his fundamental rights.

ZRP members last week arrested Biti’s lawyer Nqobizitha Mlilo, Clever Rambanapasi, an aide to Biti and Tawanda Chitekwe, Biti’s brother-in-law and detained them at Harare Central Police Station before transferring them to Karoi in Mashonaland West province, where they appeared before Magistrate Chitumwa.

Mlilo, Rambanapasi and Chitekwe, who were represented by Jeremiah Bamu and Noble Chinhanu of ZLHR were charged with contravening section 24(1) as read with section 24(4)(a) of the Immigration Act Chapter 4:02 after they allegedly departed Zimbabwe on Wednesday 08 August 2018 at an unauthorised port of exit.

The state claimed that Mlilo, Rambanapasi and Chitekwe connived at Chirundu One Stop Border post in Mashonaland West province and hatched a plan to enter Zambia by evading immigration clearance procedures from both Zimbabwe and Zambia and got arrested by officials from the Zimbabwean side of the border post.

Mlilo, Rambanapasi and Chitekwe, the state claimed, failed to produce passports to both immigration authorities from Zambia and Zimbabwe to validate their exit and entry. In setting the trio free, Magistrate Chitumwa ordered them to pay $100 bail each and remanded them out of custody to 30 August 201