Last week I was in Zambia and Zimbabwe where, amongst other places, I stayed in a lodge in the Zambezi National Park. I'm crazy about animals. All sizes and all types, with the exception of mosquitos and ticks, (I fail to understand what purpose they play in nature apart from causing misery) I like them all. 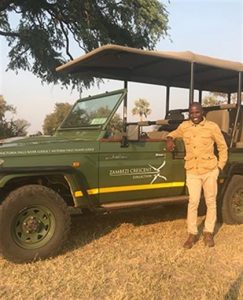 So being in the bush amongst animals is heaven to me.

Over the years, I have met many exceptional men and women who dedicate their lives to wild animals and conservation. In Kenya I met men who spend 24 hours a day, 7 days a week for months on end with orphan baby elephants. The traumatised babies adopt them as mothers and for months the guards can’t leave them alone. They sleep with them, cuddle  and feed them as if they are their own children.

In Rwanda I met guides who spend their lives in service of the gorillas. They monitor the individual primates on a daily basis and care deeply for them. They know every individual and have even learned “gorilla speak”, giving reassuring grunts to the gorillas when they bring tourists to them.

There are numerous other examples.

Yet, I have often encountered a sense of white superiority when it comes to the protection of wildlife and nature – a sense that Africans can’t or won’t protect African wildlife. I have always found it extremely infuriating, not only because of the deeply problematic colonial and racist assumptions, but also because of the sheer ignorance it exposed.

This was confirmed again last week. On the first night at our stay at the lodge, we were introduced to our guide, a young man called Gugulethu Nkomo. Over the next few days we spoke a lot and he gradually shared his extraordinary story with me.

Gugulethu is one of three brothers. His mother struggled to raise them as a single parent. Gugulethu first joined the army, but quickly knew that it wasn’t for him. He then followed the path of so many Zimbabweans and came to South Africa. He worked in Cape Town for a while where he was (shamefully) paid less than R4000 per month by a well-known company. He knew this was not going to go anywhere and decided to return to Zimbabwe in order to make something of his life.

He eventually found a job in the kitchen of the game lodge, but was determined not to get stuck there. He started studying all the nature books he could lay his hands on and pestered the older rangers to teach him things. He said that they gave him a hard time at first not believing that a guy from town would ever be able to truly know the bush and the animals.

But he proved them wrong.

After many long hours of studying while still working in the kitchen, he passed the ranger exam. He smiled when he told me that he passed the first time despite the fact that most people have to sit the exam more than once. As a result, he was promoted from kitchen hand to ranger.

For three days he took us around the game reserve and out on the Zambezi river. He happily shared his encyclopaedic knowledge of birds, animals and plants. His enthusiasm and passion for the animals were infectious as was his wide smile and deep laugh.

What was even more intriguing was his interest in politics. Once he figured out that I do political analysis, it was game on. We spoke for hours about politics in South Africa, Zimbabwe and Africa in general. I know my fair share of politics, but his detailed knowledge, even of South African politics, was truly astonishing. I’m still not sure how he manages to stay so informed with limited internet and a very demanding job.

He admitted that he hopes to one day combine his passion for nature with his love of politics. I really hope he does, because he would be a powerful advocate for nature.

In the meantime he serves as an inspiration to some of the other young men in the kitchen who wants to follow his path.

What was interesting was that every time we came back from our boat ride or game drive the other rangers would asked: “How was Gugulethu?” It was slightly puzzling to me why there was such a lot of interest in his performance, but I figured it was simply a habit that was instilled as part of their service delivery ethos.

It was only when we finished our last game drive that Gugulethu “confessed” that we had been his first clients. I was simply gobsmacked. If this was his first solo guiding, what more is there to come?

It was a privilege to meet a young man (he is only 26 years old) with such maturity, knowledge, determination and passion.

He has now joined the group of dedicated Africans who, despite insufficient resources and weak regulatory frameworks, are fighting for the conservation of this continent’s wildlife. If this is what the future of conservation looks like I have the courage to hope that future generations will also be able to experience the rhinos, elephants, giraffes, lions, buffalo and all the other spectacular creatures that share this continent with us.

– Melanie Verwoerd is a former ANC MP and South African Ambassador to Ireland.