Just hours after international observers praised a “peaceful” electoral process, violent scenes erupted in Zimbabwe’s capital Harare. According to Reuters, eyewitnesses said that one person was shot dead by soldiers near a bus rank in central Harare. Associated Press has reported that it has seen two fatalities. Initial reports from journalists on the ground describe 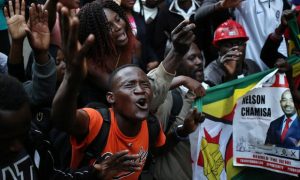 MDC supporters celebrate outside the party’s HQ in Harare, despite the lack of an official result. Photograph: Siphiwe Sibeko/Reuters

According to Reuters, eyewitnesses said that one person was shot dead by soldiers near a bus rank in central Harare. Associated Press has reported that it has seen two fatalities.

Initial reports from journalists on the ground describe soldiers firing live ammunition into crowds of opposition supporters, who had gathered near the ruling party’s headquarters to protest the results of Monday’s election.

Journalists also reported that soldiers have assaulted opposition members with batons, and deliberately damaged camera equipment. Several people have been injured. The Mail & Guardianhas not been able to independently confirm reports of fatalities. Armoured personnel carriers and tanks have been seen moving into the Harare City Centre.

Makomborero Haruzivishe said he was lucky to be alive, as a bullet just missed him. He said it was scary seeing soldiers shooting indiscriminately.

“There was a guy who was shot in front of me along First Street. I’m not sure if he died but he was motionless. It just shows you that they have not reformed. Soldiers were shooting indiscriminately as if we are in Mogadishu or Juba where there is a war, or Syria where there are terrorists,” said Haruzivishe, a former secretary general of the Zimbabwe National Students Union, which backs the MDC Alliance.

He said the MDC leadership had not asked them to protest, but youths had decided “to defend their vote. “In the end, if formal institutions fail to illuminate the will of the masses, then the people will, in the streets of their land, speak out again in defense of their victory, their future and their president Nelson Chamisa,” he said.

Ray Saurombe said he was assaulted by soldiers even though he was not part of the MDC protest “There were tankers on the street and armed soldiers on the street. I was beaten up for no apparent reason even though I was not protesting. I saw a guy who was bundled into a military truck who was brutalised and thrown out,” he said.

Ropafadzo Gumunyu, another eyewitness, added: “It’s been hard. Shots were fired. There was burning of some cars and tyres like they do in South Africa. It’s them who started it by rigging and I’m told tomorrow will be worse.”

Results released on Wednesday by the Zimbabwe Electoral Commission (ZEC) gave Zanu-PF a sweeping majority in parliament. Results for the presidential vote have yet to be released, although opposition leader Nelson Chamisa claims that he has won decisively.

The official final tally of parliamentary results, as released by the ZEC, shows that Zanu-PF won 144 of 210 seats in parliament, giving the party a two-thirds majority. The MDC Alliance won 64 seats.

Opposition leaders have cried foul, claiming that the election was rigged in favour of President Emmerson Mnangagwa and the ruling Zanu-PF.

On Tuesday, senior opposition official and former finance minister Tendai Biti claimed that he and Chamisa were being targeted for assassination by vice-president Constantine Chiwenga.

Chiwenga is the former army chief who, along with Mnangagwa, led the military coup in November 2017 which unseated Robert Mugabe.

Zimbabwean president Emmerson Mnangagwa has blamed the opposition for the violent scenes.

“Incidents of wanton violence and hooliganism which broke out this afternoon in the capital come as a complete surprise,” Mnangagwa said, speaking on state television on Wednesday evening. “We hold the MDC Alliance and its whole leadership responsible for this disturbance of national peace which was meant to disrupt the electoral process.”