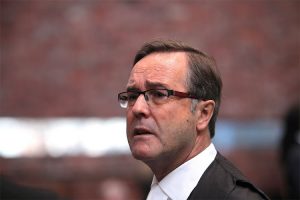 This comes as the nine-member constitutional court bench will on Friday deliver judgment on Chamisa’s application to nullify President Emmerson Mnangagwa’s victory in the July 30 election.

Gauntlett told Business Day that he was denied permission to argue in the court despite having previously appeared before Zimbabwe’s courts a number of times.

“I have appeared [with Law Society support and ministerial assent] on eight previous occasions in Zimbabwe’s courts.

“I have only once before been refused the right to appear. This was when I was briefed against the government of Zimbabwe in 2008 to have the Sadc [Southern African Development Community] tribunal’s award against land seizures registered in the high court in Harare.

“By statute, any foreign legal counsel appearing in a Zimbabwe court must have the support of the Zimbabwe Law Society and the assent of the minister of justice. This assent requires the minister to consult a member of the Legal Education Council and to confirm that the country in question is a ‘reciprocating country’ with Zimbabwe as regards admission,” he said.

Repeated efforts to contact Ziyambi on Thursday night were fruitless. Mpofu and Ngcukaitobi could also not be reached.

Sources from Harare told Business Day Ziyambi’s actions were inconsistent, after he appeared to have granted Gauntlett permission, before making a U-turn.

In a letter on Monday to Chamisa’s attorneys in Harare, the minister’s office had first suggested it had not been given required supporting documents for the admission applications. However, it conceded this did not apply to Gauntlett.

“Thereafter, the minister said there was a delay because the Legal Education Council member needing to be consulted was ‘out of the country’. It was not explained why the ‘consulting’ could not be done by e-mail or telephonically,” said Gauntlett.

“Shortly before 10am he [the minister] notified the Chamisa attorneys, as the challenge was about to start, that he in fact had refused all the applications on the grounds that these had been made too late and because South Africa is not a ‘reciprocating country’ with Zimbabwe,” Gauntlett said.

In an interview in Harare, Chamisa’s spokesperson, Nkululeko Sibanda, said denial of permits to the SA lawyers was not a surprise as Ziyambi acted as Mnangagwa’s electoral agent in the election.

“The minister involved was the election agent of President Mnangagwa and he was certainly compromised.

“The law in Zimbabwe also clearly states that no-one should be denied the chance to use a lawyer of their choice, and this provision was clearly breached,” he said.

Meanwhile, there was a palpable atmosphere of anxiety in Harare on Thursday as Zimbabweans awaited the constitutional court ruling.