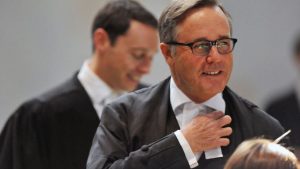 HARARE – Minister of Justice, Legal and Parliamentary Affairs Ziyambi Ziyambi is reported to have turned down the request to issue  a certificate of exemption to Nelson Chamisa’s South African lawyer Jeremy Gauntlett.

Gauntlett who is a Senior Counsel (SC) and a Queen’s Counsel (QC) was supposed to argue a portion of Nelson Chamisa’s challenge of the presidential election results at the Constitutional Court on Wednesday.

Chamisa is challenging the results of the presidential election announced by the Zimbabwe Electoral Commission (Zec). Justice Minister Ziyambi said that Gauntlett must apply for a work permit instead because he is from South Africa, which the minister deemed not to pass the test of reciprocity.

ISSUANCE OF A CERTIFICATE OF EXEMPTION IN TERMS OF SECTION 7 OF THE LEGAL PRACTITIONERS ACT: CHAPTER 27:07

In terms at Section 7 of the Legal Practitioners Act Chapter 27:07 where the minister In consultation with the Council for Legal Education is satisfied that having regard to the complexity or special circumstances of the matter, it is just and reasonable for a person to obtain the services of a Legal Practitioner who has a special and particular experience relating to such matter and that such Legal Practitioner is not normally resident in Zimbabwe but is from a reciprocating country, he may grant a certificate exempting the legal practitioner concerned from satisfying the requirement of subparagraph (iii), of paragraph (a) of subsection (i) of section five live of being normally resident in Zimbabwe or a reciprocating country.

“where the minister is satisfied that the law of any country other than Zimbabwe permits the admission to the practice of law in that country whether generally or in particular cases for particular purposes, of legal practitioners normally resident in Zimbabwe he may, after consultation with the Chief Justice and the Council for Legal Education declare such country by statutory instrument to be a reciprocating country”.

South Africa does not pass the test of reciprocity. Therefore application should be declined.

Minister Ziyambi seems to have made an about turn after telling NewsDay that his ministry was going to grant the applications because it did not want to be seen to be blocking anyone. In an interview with NewsDay, Ziymbi said,

My secretary has indicated that indeed, we have their application for their advocates to operate and we will process it. We don’t want to be seen to be blocking what they are trying to do.

Ziymabi was the chief elections officer for President Emmerson Mnangagwa in the July 30 elections.

However, Constitutional law expert Alex Magaisa said that the Minister had used the wrong law as it had been updated in 2004. He also said that the minister failed to interpret the law. Wrote Magaisa,

he Minister is also using the wrong version of the Legal Practitioners Act. That’s why he refers to “subparagraph (iii) of paragraph (a) of subsection (1) of section five” which was removed in 2004 by the Law Reviser because it was an error. The Justice Minister didn’t know!