NANGO is deeply concerned and condemns violence that occurred in Harare where the sanctity of life was violated resulting in the loss of lives of innocent people. NANGO implores all stakeholders to explore all possible dialogue channels to resolve any forms of conflict and differences without resorting to violence. Our sincere condolences go to the families that have lost beloved ones in these skirmishes. May their souls rest in eternal peace. 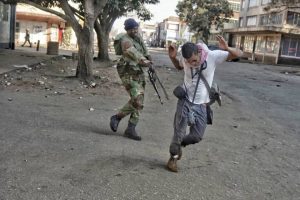 NANGO commends all observers that were part of the NANGO Election Observer Mission who diligently observed election processes from mid-day on Sunday 29 July until the early hours of Tuesday 31 July. Ultimately, NANGO static and roving observers assessed voting at 3244 polling stations sampled across the country. We also extend our appreciation to Zimbabwean citizens in their entirety that remained peaceful and calm.

In an effort to promote election transparency, 364 NANGO observers manned polling stations until ballot boxes were securely transferred to Zimbabwe Electoral Commission command centres.  Our teams made a number of key observations which will be highlighted in detail in the Preliminary report shortly. However, NANGO deems unfortunate the high number of potential voters that were turned away for various reasons ranging from bringing with them invalid identity documents, being in the wrong polling stations or their names missing completely from the voters roll despite having been registered.

Building on election transparency, NANGO believes that results should be traceable up to polling station level. In this regard, before transferring of ballot boxes, in accordance with the Electoral Act Chapter 13 Section 64, candidates and party agents should have been present to observe recording of results on the polling-station return.

Social media keeps the citizens abreast on what is happening countrywide, however the same unfortunately is being used largely to then circulate unofficial and wrong information which may resultantly cause alarm and despondency. We urge all NANGO members, observers and general citizens to refrain from circulating unconfirmed information and to maintain peace and harmony.

NANGO is an apolitical, non-profit making and non-denominational umbrella body of NGOs in Zimbabwe, founded in 1962.  NANGO promotes a proactive community of NGOs that are responsive and committed to the sustainable development needs of all people in Zimbabwe and the full realization of human rights, democracy, good governance and poverty alleviation.