Harare - The MDC Alliance’s Lawyers have submitted their Petition at the Constitutional Court to annul the results of the recent presidential elections. 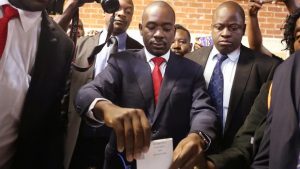 The Zimbabwe Elections Commission (ZEC) announced Emmerson Mnangagwa as the winner in the election which the MDC claims was marred by massive rigging.

Chris Mhike of Atherstone and Cook is the instructing attorney and Thabani Mpofu is lead counsel after the colorful South African barrister, Dhali Mpofu and  Advocate Thembeka Ngcukaitobi were denied accreditation with the government citing lack of work permits.

The Main Application is 230 pages long as well as several separate bundles of evidence.
More later