Fidelis Mhashu, a very gentle and courageous legend of Zimbabwe’s democratic struggle is no more. 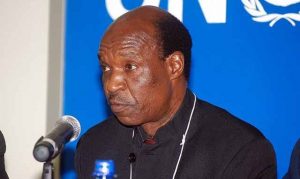 He passed away Monday night at Parirenyatwa hospital, Harare.

It was in Mhashu’s Chitungwiza house that numerous meetings that led to the formation of the party were held. It was in the same house that the doyen of democracy, the late Dr Morgan Tsvangirai and others gathered to discuss the way forward in forming the great and formidable political movement that Zimbabwe has grown to love.

Born on the 1st of July 1942 in Mhondoro, Hon Mhashu started his profession in the teaching field in Buhera in 1976. He later became a lecturer at Mutare and Seke teacher’s colleges before venturing into politics as a councillor in ward 21 of Chitungwiza North.

He served two terms in that council before he was fired for fighting for human rights in 1996. He then became part of the democratic struggle and was part of the team that pushed for the formation of the MDC to which he stood as a Member of Parliament from 2000 until 2013.

He was the Minister of Housing and Social Amenities in the Inclusive government as well as a member of the National Executive of the MDC.

His body will be carried from the funeral parlour in Harare to his Chitungwiza home, where it will lie in state ahead of the burial at Glen Forest cemetery tomorrow.

Mourners are gathered at his Chitungwiza home.