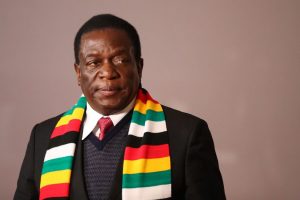 On 25 July 2018 I wrote to the United Nations, addressing it to the United Nations Development Programme, UNIC and UNICEF and copied it the Zimbabwean Clerk of Parliament and the Zimbabwean Speaker of Parliament and requested that they forward it to Emmerson Mnangagwa as I did not have his email account. I attached a video footage of Willian Mutomba Jr, son of William Mutomba who went on to “win” the parliamentary seat of Buhera North. In the video footage, William Mutomba Jr, campaigning for his father, was fiercely threatening helpless villagers that the Zanu PF machinery knows there are 400 registered voters for the polling station near the meeting place, and he was able to identify who votes for the MDC Alliance, who will be dealt with after the election.

The world had already been told by Emmerson Mnangagwa’s ally, Josiah Hungwe, that Emmerson would shoot to retain power, so it does not come as a surprise that he instructed the army to come onto the scene and shoot people who were expressing their displeasure at the manner in which he and Priscillah Chigumba has colluded to steal the people’s victory. Hungwe made the statement when he was commissioning a $185 000 clinic constructed through Tongaat Hulett partnership with Chiredzi Rural District Council and the Gudo Community in May 2018 as Mnangagwa and his officials started using official opening of facilities as campaign platforms across the country. Mnangagwa did not utter a single word to rebuke his errant Hungwe.

As the results start coming up, we are now seeing surprising discrepancies such as Chiredzi North where the voters’ roll seems to indicate that there are 30688 registered voters, yet the number of votes for the Zanu PF ‘winning” candidate in the parliamentary contest
was 35893.  We have seen in the voters roll the same national identity number being used by more than one person and registered at different polling stations, and we know how this was an effort to compliment Zanu PF who we are aware have found a special soap that will clean the voting ink off the hands of voters, a trick they used in 2013  when Acie Lumumba was caught with thousands of voter registration slips which would be issued to Zanu PF supporters who would have voted and washed away the ink to vote again. Chigumba’s arrogance is a public record, so I will not go too much into what Emmerson Mnangagwa knows very well.
Human being naturally respond to oppression, and it is for Government to create an atmosphere that allows progress.